Posted on September 26, 2014 by Charles Johnson 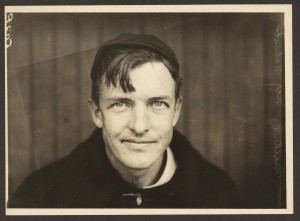 At Boston’s South End Grounds, Giants reliever Christy Mathewson fails to hold a 7-4 lead, and Boston wins, 8-7. It is Matty’s third loss. The Giants will return the rookie to Norfolk of the Virginia League rather than pay the full $1,500 purchase price for Mathewson, and he will be drafted by Cincinnati for $100.

In June 1900, William Hannon, the owner of the Norfolk franchise in the Virginia League, gave his promising young pitcher, Christy Mathewson, a choice. There were three teams that wanted the pitcher’s services, each willing to pay Hannon a conditional $1,500 for the youngster’s contract. Hannon proposed to let Mathewson choose between the three — the Cincinnati Reds and New York Giants of the National League, and the Milwaukee franchise of the Western League. Thinking that it would be easier to impress from amongst New York’s weak pitching staff than from the strong staff Connie Mack was building in Milwaukee, Mathewson chose the Giants.

George Davis was the manager of the Giants, and he liked Mathewson’s stuff right away, and gave Mathewson’s signature pitch — the “fadeway” — its name. Used infrequently in the final weeks of the season, Matty didn’t seem prepared for the big time. He worked in five games, with no victories, and gave up 35 hits in 30 innings. Worse yet, walked 14 batters, proof that he hadn’t gotten hit pitches under control.

Andrew Freedman, the notoriously mercurial Giant owner, lost no time in returning Matty to Norfolk so he could get a refund on his $1,500. While Freedman appeared to care nothing for what happened to this pitcher, things were not what they seemed. Freedman had asked his ally, Cincinnati Reds owner John Brush, to draft Mathewson from Norfolk as soon as Freedman sent the young man back. Without notifying Mathewson of his machinations with Freedman, Brush did just that.

Convinced he was a failure, Matty was prepared to return to Bucknell and finish his college education. Instead, Connie Mack, now charged by Ban Johnson with organizing an American League club to begin play in Philadelphia in 1901, reached out to Mathewson, offering him $1,500 to sign with his club. Fond of college ballplayers, Mack was intent on acquiring more. Owing money for books and other items at Bucknell, Matty asked Mack for a $50 advance, and reached an oral agreement with him.

At the same time, however, by prearrangement, the Reds traded Mathewson back to the Giants for the washed up “Hoosier Thunderbolt,” Amos Rusie. Mathewson still considered himself the property of Milwaukee, notwithstanding the dealings of the Giants and Reds. Andrew Freedman, though, demanded that Mathewson come to New York immediately to explain why he had any conversations at all with the upstart American League, which he insisted wouldn’t last more than a few months. Every player who signed with the American League, warned Freedman, would be blacklisted — no small threat to a young player like Mathewson. Freedman, a litigious man, threatened the young pitcher with a lawsuit.

Promised by Freedman that his travel costs would be reimbursed, Mathewson went to New York and explained to Freedman that he didn’t want to go back on his word to Mack, and had taken a $50 advance from Philadelphia. Mathewson asked if Freedman would return the money to Mack if Mathewson signed with the Giants, and Freedman said he would. Of course, though, Freedman never did, and Mathewson paid Mack back out of his own salary. Mack, for his part, never responded to the letter Mathewson had sent asking if Mack would stand by him in the event of a suit by Freedman.

What Mathewson didn’t know was that Brush had already agreed to purchase the Giants from Freedman. By acquiring Rusie for the Reds, he’s already removed from the Giants a notoriously balky player known for haggling over salary and even holding out. For Brush, the trade was less about sending a promising Mathewson to the Giants than making sure he didn’t have the cantankerous Rusie waiting for him in New York. Mathewson was the unwitting participant in what passed for business dealings in the National League at the time, caught in a play conducted between two scoundrels.