This Day in Giants History, July 29, 2009: Brian Sabean Is Not Afraid To Trade Pitching Prospects

In a day spent dismantling their infield, the Pirates send second baseman Freddy Sanchez to the Giants for top pitching prospect Tim Alderson. 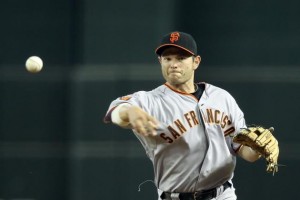 Giant general manager Brian Sabean has never been afraid to make a move. If his team has a need, Sabean won’t shy away from addressing it through trades. And while the results haven’t always been great, Sabean has more hits on his record than misses.

One type of trade Sabean has been very good at involves trading away Giant pitching prospects. Given the Giant system’s success in developing young pitchers, it should not surprise us that more often than not, Sabean seems to know which of his highly touted prospects he should keep and which he will not miss after they are gone. So let’s look at some of those pitching prospect trades — at both their context and the players involved — to see where Sabean has most helped the team.

November 26, 1996 – The Giants trade starting pitchers Fausto Macey and Allen Watson to Anaheim for first baseman J.T. Snow. We all remember the big splash new general manager Brian Sabean made with the Matt Williams for Jeff Kent deal, but this one happened two weeks later. Fausto Macey, a throw-in to balance out the trade for Snow, was not much of a prospect, and Sabean was not the only GM who knew this. Giving up Allen Watson, whose only good year would be in relief in 1999, for Snow proved to be a good move for the Giants.

July 30, 2001 – The Giants trade outfielder Armando Rios and pitcher Ryan Vogelsong to the Pirates for pitcher Jason Schmidt and outfielder John Vander Wal. A classic. Jason Schmidt would, in five-and-a-half seasons, produce 22.7 WAR for the Giants, and be the ace of two different playoff teams, including the one that made it to the 2002 World Series. In four-and-a-half seasons as a starter and reliever, Ryan Vogelsong would be one of the worst pitchers in the history of the Pittsburgh Pirates. This trade was a steal, and all because Schmidt was to be a free agent and the Pirates of the time didn’t pay actual major league ballplayers to play on what they claimed was a major league team. Sabean signed Schmidt to that five-year, $37 million contract, and then let him walk to the Dodgers at just the right time.

July 28, 2002 – The Giants trade pitchers Ryan Meaux and Felix Diaz to the White Sox for outfielder Kenny Lofton. Kenny Lofton homered on the first pitch he swung at in a Giants uniform, which set the tone for a great two months, and then he hit .292/.350/.389 with five stolen bases in the postseason. None of that was outstanding in and of itself, but it was an enormous improvement on Tsuyoshi Shinjo. Sabean seemed to understand before some general managers that when one is getting a two-month rental, both terms — it’s only two months, and it’s only a rental — matter. He wasn’t going to give up much for Lofton, who was by this time 35, a middle-of-the-pack center fielder offensively, whose defense wasn’t close to what it had been in his youth. Meaux, a 23-year-old soft-tossing lefty used mostly as a reliever, stayed in the White Sox farm system until 2005, and then bounced around some other systems for two more years, never making it to the majors. Diaz pitched in 18 games for the 2004 White Sox, with a 70 ERA+.

July 31, 2003 – The Gaints trade pitchers Ryan Hannaman, Kurt Ainsworth and Damian Moss to Baltimore for pitcher Sidney Ponson. Sabean actually was thought to have given up a lot for two months of Sir Sidney, who had become a hot commodity because he was having a good season, but who was still heavy and had in years past had trouble staying healthy. Ainsworth at the time had a broken shoulder blade, but he threw hard with a full assortment and so remained an outstanding prospect. Moss was rotation filler, another former Brave starter gone bad outside of Georgia whose persistent control problems would cause him problems in the DH league. Hannaman was a high-upside high school pitcher with mid-90s heat and a good slider, but would never make it to the majors. Ainsworth would pitch in ten games for the Orioles over two years, with a 47 ERA+. Moss would pitch in ten games in 2003, with a 73 ERA+. The deal didn’t provide much for the Giants in their successful 2003 run to the postseason (Ponson only pitched a little better than league-average the rest of the way), but as it turned out, Sabean didn’t give up much at all.

November 14, 2003 – The Giants trade pitchers Francisco Liriano, Joe Nathan and Boof Bonser to Minnesota for catcher A. J. Pierzynski. At the time, this looked as if it might be an outstanding deal to replace Benito Santiago with the American League’s favorite red-ass at the cost of the standard package of promising/troubling arms. Bonser’s stock had plummeted just as fast as his strikeout numbers as he rose through the Giants’ system. He experienced a brief resurgence at Fresno at the end of 2003. Scouts loved Liriano’s arm, but he couldn’t keep it healthy, missing half of the 2002 season and all but one game of the 2003 season with shoulder problems. Nathan’s numbers had made a huge leap forward in 2003, as he put up strikeout and hit rates that were totally out of line with anything he had ever done before, in the majors or minors. His stuff was impressive, but one can see why Sabean may have viewed it as a fluke and an opportunity to trade Nathan when his perceived value was higher than his actual value. Whoops.

July 29, 2009 – The Giants trade pitcher Tim Alderson to Pittsburgh for second baseman Freddy Sanchez. Sanchez had always been dependent on a high batting average for his offensive value, and by this point in his career he was only a league-average hitter. The two months he spent as a Giant in 2009 were bad (.284/.295/.324), but it was an upgrade over Emmanuel Burriss (.238/.292/.267), and Sanchez would have better 2010 (102 OPS+) and 2011 (107 OPS+) seasons, returning to those league-average norms. He will always be remembered by Giant fans for his postseason play in 2010, when he hit well against Philadelphia in the NLCS and hit three doubles in his first three plate appearances in the World Series. Alderson, who was ranked as the 45th best prospect in baseball by Baseball America, was thought to be a great pick-up by the Neal Huntington’s smart front office. Yet Alderson’s development stagnated, he had injuries in 2012 and 2013, and he has not made it to the majors. He currently in the rotation of the Stockton Ports, Oakland’s affiliate in the high-A California League.

July 31, 2010 – The Giants trade pitcher Daniel Turpen to the Red Sox for reliever Ramon Ramirez, and first baseman John Bowker and pitcher Joe Martinez to the Pirates for reliever Javier Lopez. This trade might seem a bit of overcompensation since the Giant bullpen hadn’t been a problem, ranking second in the league in both ERA and OPS+ allowed at the time of the trade. However, a lot of that value was tied up in tremendous seasons from Brian Wilson, Sergio Romo and Santiago Casilla. The two pitchers Sabean added suggested that with Jeremy Affeldt hurt the Giants needed the sort of situational specialists Bruce Bochy had success employing in the past. Sabean didn’t give up much. Neither Bowker nor Martinez had much of a shot of contributing, while Turpin was an organizational arm.

July 28, 2011 – The Giants trade pitcher Zack Wheeler to the New York Mets for outfielder Carlos Beltran. If there were any doubts the Giants were a club in dire need of offensive assistance, consider this: a week before acquiring Carlos Beltran, Bruce Bochy batted Mike Fontenot second and Aaron Rowand third with Cody Ross cleaning up and Emmanuel Burriss batting fifth. Yes, Beltran was a rental, but a Cooperstown-caliber rental with a history of post-season heroics. Beltran was the best hitter on the market at the trade deadline, with a .289/.391/.513/151 OPS+ line. He would do even better with the Giants over the next two months: .323/.369/.551/159 OSP+, but he would also miss two weeks with injury, which by itself did not cause the Giants to lose the division. (After all, they lost it by eight games.) Wheeler was the Giants’ first-round pick in 2009, and had a 3.99 ERA in 16 starts for high-A San Jose. His command and control and an arm-slot that made him susceptible to lefties raised questions, but he also has mid-90s heat, a sharp breaking ball, and one of those bodies that just looks like an All-Star starter. He’s also considered to have a fine baseball intelligence and superior ability to manage an at-bat. He has a front-of-the-rotation ceiling as he demonstrated in 2013 once he quit tipping pitches, but no certainty of reaching it now that he’s rehabbing from Tommy John surgery.

July 31, 2012 – The Giants trade outfielder Nate Schierholtz, catcher Tommy Joseph and pitcher Seth Rosin to Philadelphia for outfielder Hunter Pence. Pence brought his awkward batting stance and running style to San Francisco, along with a .271/.336/.447 slash line (109 OPS+), and inspirational pre-game speeches, and helped the Giants win their second World Series in two years. His numbers actually took a hit in San Francisco in that championship run, but in 2013 and 2014 he’s hit .289/.345/.478/135 OPS+ and become an All-Star. A fourth-round pick out of the University of Minnesota, Seth Rosin was considered a solid relief prospect. He’s huge at 6-foot-6 and 250 pounds, a he throws a 94 mph fastball that he can locate and that his long stride to the plate helps explode on hitters. But neither his curve nor his changeup is plus, which limits his potential so far. He’s bounced through a few systems since the trade.