This Day in Giants History, April 8, 2006: The Aged Outfield

On April 8, 2006, the Giants starting outfield consisted of Barry Bonds (41 years old) in left, Steve Finley (41) in center, and Moises Alou (39) in right. It is the oldest starting outfield in major league history. 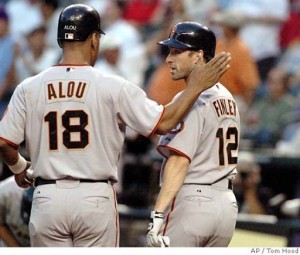 Bill James, back in the early 1980s, is thought to be the first person to write that a batter’s skills, and the numbers they put up, rapidly improve during their early twenties, peak at age 26 or 27, settle into a plateau where the player loses just a handful of value each season, and finally enters a more serious deceleration after the player enters his thirties. This “career arc” has since been examined over and over, and has been demonstrated to be accurate for almost all major league players.

Despite all the readily available evidence that it wasn’t going to be a good idea, Giants general manager Brian Sabean crafted a 2006 roster that was much like the 2005 roster, only where the 2005 model was the twentieth oldest, by weighted age,[1] in the major leagues since 1901, the 2006 model was even older, ninth on the all-time list. (Oldest, you ask? The 2005 Yankees.) In fact, if only Giant hitters are considered, weighted by plate appearances, the 2006 squad was the oldest since 1901, and the 2005 hitters were sixth-oldest, with the 2002 hitters eighth oldest and the 2003 hitters ninth oldest.

The 2006 team was not “aging,” or “experienced,” or “proven.” It was old. It was old because the front office had a longstanding failure to develop position players for the major league roster. The barren farm system’s problems became evident when the veterans Sabean had favored for years started flailing and no capable call-ups were waiting in the wings.

By 2006, it had been a long time since the Giants had developed a good hitting prospect. Bill Mueller, drafted in 1993, was the last one. Since then the best position players developed by San Francisco had been Grade C types like Marvin Benard, Doug Mirabelli and Armando Rios. That’s worse than a disappointing system. If a team never develops star-caliber major league hitters, it then has to find them on the free agent market. Those players are scarce, which makes them extraordinarily expensive, and that’s assuming the Yankees don’t offer them more. Additionally, free agent players are older and in many cases are entering the decline phase of their careers.

Since the Giants couldn’t develop even average major league players, they had to buy them on the free market. Giants rosters of these years had featured a cable car of overpaid thirty-somethings, including Michael Tucker, Jeffrey Hammonds, Shawon Dunston, Glenallen Hill and Brent Mayne.

Of course, fixing this system through the amateur draft was especially difficult when the team was purposely giving away its picks as free agent compensation. Having signed Armando Benitez, Mike Matheny and Omar Vizquel during the 2004-05 offseason, the Giants didn’t pick until the 4th round of the June 2005 draft. This was not accidental; the Giants had for many seasons put money into the major league roster by signing free agents while avoiding premium talent in the amateur draft. Perhaps Sabean was scarred by his first draft as Giants general manager in 1997. The Giants had five first round picks and turned them into Tony Torcato, Nate Bump, Arturo McDowell, Chris Jones and Jeff Urban.

We now know that the Giants would choose to put a renewed emphasis on the draft, and would show no fear in drafting the best talent available — Tim Lincecum, Buster Posey — without regard to how much they might have to pay in bonus money to sign them. This sea change in the Giants’ roster-building strategy would lead to unparalleled success for the San Francisco franchise. But in April 2006, with the geriatric outfield representative of a geriatric roster, things did look bleak.

[1] Weighted age is calculated by first creating separate ages for position players and pitchers, weighted by plate appearances and innings pitched, respectively. Then, the weighted age of position players is multiplied by .6, and that of pitchers multiplied by .4 and then summed to calculate the WA for the entire team. Obviously, there are other ways to weight playing time (by games played to weight relief pitchers and pinch hitters more heavily, or innings in the field) and there may be quibbles with the weighting (keep in mind the 60 percent also takes defensive playing time into account), but overall this approach provides a reasonable indication of team age.