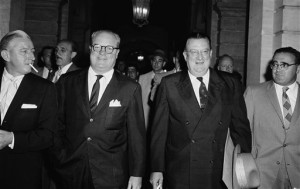 Despite declining attendance for the Giants during the 1950s, New York remained a profitable place to conduct the business of baseball. By 1956, the economics of New York Giants baseball had been revolutionized by television and the steadily increasing income it yielded. In 1946, before television, live admissions at the Polo Grounds and on the road contributed almost 80 percent of the Giants’ baseball-related income, broadcasting only 5 percent. In 1950, broadcasting revenue exceeded road-game income, and the share of income contributed by the live gate fell to 70 percent, while the television-radio share was up to 15 percent. By 1956, broadcast income contributed more than 30 percent of the Giants’ total team income. As a result, even while the Polo Grounds attendance was declining, the Giants did not lose money. The team earned a profit even in dismal 1956, when they had a 67-87 record and only 629,179 in attendance. The Giants, thanks to their broadcast revenues, managed to post the third-highest income in the National League, despite recording the league’s lowest home attendance.

While the Giants attendance was in decline, Walter O’Malley, owner of the Brooklyn Dodgers, was plotting to move his franchise to California. He needed another National League franchise to move with him, so that concern about travel expenses would not be a reason for the other owners to block the move. In making his pitch to Stoneham to join the Dodgers in their move to California, O’Malley did more than play on Stoneham’s concerns about the Giants’ future in a Dodger-less New York. (Stoneham was well aware that games against the Dodgers accounted for more than 30 percent of Giants’ home attendance.) While O’Malley provided a vision of the riches that would await the Giants on the West Coast, he was careful to mention that one of the sources of the new wealth would be pay television.

For all the wealth it had produced, there had been two features of the system of free commercial television, as it had evolved in New York over the first decade of its life, that frustrated the Dodger and Giant owners. The first was the practice of televising home games. Televising road games would have been preferable, of course, since that would increase exposure and steer fans to the ballpark for home games. However, television policy had been forged in the late 1940s, when primitive technology and high expense had precluded the televising of road games back to New York. Even into the middle of the 1950s, the expense barrier limited the number of road broadcasts, although by 1956 both the Yankees and the Dodgers were televising a selected number of away games. But to maintain the high number of programs that had to be furnished in exchange for the type of income to which the clubs had become accustomed, the teams had to make their entire home schedules available for broadcast.

Stoneham and O’Malley at times refused to blame home-game telecasts as the primary cause for the attendance decline that had set in after 1950, but the two owners believed, quite reasonably, that their television policies cut into the live gate, especially for big night games. The owners also found that it was impossible to come up with a compensating number of road games to beam back to New York without conflicting with someone else’s home game being played at the same time.

There was also a fundamental disquiet about the availability of ball games on “free” home television at all. On this issue, the concern was not about finding a way to redirect fan interest out to the ballpark, but instead about maximizing the money that could be drawn out of the fan who stayed at home. That fan at home had haunted Walter O’Malley ever since “that night we had 15,700 people in Ebbets Field and I asked a radio-wise man who was with me . . . how many sets were tuned in to that particular game and after some phone calling he came back and said, ‘Walter, there are about 2,440,000 sets watching this game.'” “That,” O’Malley said later, “made me a convert right away” to the idea of the need for a mechanism to make that devoted fan pay directly for watching a telecast at home through a system of pay television.

In that innocent, early moment in the evolution of pay-television economics, the expected, almost effortless rewards were staggering. O’Malley foresaw nothing less than an immediate doubling of broadcast revenues, and that was just to start. Based on a one dollar fee for the privilege of tuning into each game, Stoneham’s calculations were even more optimistic. With 500,000 sets receiving any one particular game, gross receipts would amount to $500,000, and the ball club would claim one quarter — $125,000 — of that, in accordance with receippts division formulas being discussed. That per-game yield would add up to more than $10 million in the course of a season — a monumental figure, and one that Stoneham evidently took seriously. Indeed, Stoneham expected to realize that pay-TV bonanza from home-game telecasts alone, even with the inevitable toll they would exact from the live gate, which paled by comparison with the size of this novel revenue source.

Matthew Fox, president of a pioneering pay television company called Skiatron TV, was the messenger who delivered the good news about pay television to Walter O’Malley, and was now poised, at O’Malley’s direction, to take it to Stoneham as well. Fox and O’Malley had met in February and March 1957, and Fox flatly claimed that the technology of pay TV had, in fact, come of age. The message was so encouraging that he and O’Malley reached a tentative agreement in April 1957, assigning Skiatron pay-television rights to Dodger games, and the prospect of such an agreement was then put to Stoneham. In mid-May 1957, Horace Stoneham entered into a multimillion-dollar contract with Skiatron to telecast, on a closed-circuit system, the next year’s Giant games if in San Francisco, and after the 1959 expiration of the Giants’ current TV contract if the team was still in New York.

But as Fox, Stoneham and O’Malley each knew, this could not be done in Brooklyn or New York. While Fox promised the technology was ready, the New York city council had actually already voted to bar the awarding of pay-television franchises within the five boroughs. Reversing that stance would take a fight. Whether or not Skiatron was ready, it was certain that New York’s government was not going to welcome it with open arms.

As it turned out, Skiatron was not ready, and what it proposed could not be done in Los Angeles or in San Francisco either. To install even a quick-and-dirty cable system, Skiatron needed reserves of capital it did not have, despite a loan of $120,000 from O’Malley to help get it up and running.) Within two years of Fox’s conversations with Stoneham, Skiatron was bankrupt and under investigation by the Securities and Exchange Commission.

This is not the place to tell the story of the Giants’ move from New York to San Francisco, but needless to say, it was not an organized nor well-thought-out process, and the team’s television policy demonstrate this. Aside from the contract with Skiatron, an entity which had always been more talk than walk, the Giants had made no arrangements to televise any San Francisco Giant games in 1958. On April, 28, 1958, two weeks into the season, Westinghouse, owner of KPIX, channel 5 in San Francisco, offered to broadcast whatever Giant road games Stoneham was willing to broadcast, and the station would only charge the sponser the actual line charges and the cost of personnel to make the broadcast, expecting no profit. This was done in response to O’Malley making a deal with Westinghouse’s KTTV, channel 11 in Los Angeles, in which all Dodger games played in San Francisco would be televised in Los Angeles. (O’Malley apparently didn’t regard his contract with Skiatron as ironclad.) Stoneham, using the Skiatron contract as the reason, turned down Westinghouse’s offer.

Stoneham’s being caught without a television plan was made more embarrassing by the fact that his competitors had moved into the vacated New York market. The Philadelphia Phillies had made an arrangement with a New York channel to televise all 1958 Giant and Dodger games from Connie Mack Stadium in Philadelphia. In fact, the day after Stoneham turned down the Westinghouse offer, the St. Louis Cardinals announced that they and the Pittsburgh Pirates were in negotiations with a Newark, New Jersey, channel to do the same thing, beaming to New York all Giant and Dodger games played in St. Louis and Pittsburgh. They might now be the San Francisco Giants, but in 1958 New Yorkers saw more of them on their television sets than did San Franciscans.

This entry was posted in This Day in Giants History, Uncategorized and tagged 1958 Giants, business of baseball, Horace Stoneham, Move to San Francisco, television, Walter O'Malley. Bookmark the permalink.