The Giants’ Most Lopsided Teams, Part 1

Posted on September 5, 2014 by Charles Johnson 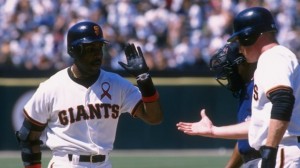 Barry Bonds is congratulated by teammate Matt Williams as he crosses home plate following a home run during the Giants 10-3 victory over the Atlanta Braves on July 28, 1996. (Credit: Otto Greule Jr/Stringer/Getty Images)

In 2012, the Los Angeles Angels of Anaheim powered their way to 89 wins primarily on the strength of their offense. Mike Trout led the Halos’ effort with an amazing 8.6 offensive WAR (or “oWAR,” which is WAR without consideration of defense) as calculated by Baseball Reference. With support from Albert Pujols (3.8 oWAR), Torii Hunter (4.0) and even Eric Aybar (3.8), the Angels managed to score more runs than 25 of the other 29 teams in the major leagues.

But with a miserable pitching staff that could eke out only 2.6 pitchers’ WAR combined, the Angels ultimately fell flat in the race to win the American League West in 2012, placing third behind the Texas Rangers and the division champion Oakland Athletics.

Rewind the clock one year earlier to 2011 and you may remember almost the polar opposite situation in Philadelphia. The oft-hyped rotation of Roy Halladay, Cliff Lee, Cole Hamels and Roy Oswalt fronted a pitching staff that led the majors in pitchers’ WAR that season, but received little help in the way of support from an offense that could be considered league-average at best.

Over the next few days, I want to look at some of the more extreme paths taken, examining Giant teams of the past that have leaned heavily to one side of the roster or another. Today, we’ll look at those Giant teams where the hitting was so much better than the pitching that the result was a “lopsided” team.

Of course, first, a table:

For each season the Giants have played since 1901, I’ve simply compared oWAR (that part of WAR created by a team’s offense) with the WAR created by their pitching staff while on the mound (and not hitting). I’ve prorated the WAR per 162 games, so that more modern teams don’t have a built-in advantage because they play more games in a season. Above are the twelve Giant teams where the spread between oWAR and pitching WAR was most lopsided in favor of hitting.

It’s interesting to see so many good teams show up on this list. There are a World Series champion, two other pennant winners, and some quality also-rans.

The 1995 and 1996 Giants show that the hitting doesn’t have to be historically great to create a lopsided team. It just has to contribute a lot more WAR to the cause than does the pitching. These teams had both Barry Bonds and Matt Williams, and Ellis Burks and Glenallen Hill helped too. But they only scored 652 runs in 1995 (eighth in a 14-team league) and 752 runs in 1996 (good for ninth in the league). By OPS+, the two teams finished seventh and eighth, respectively, in a 14-team league. The pitching, on the other hand, was the worst in the league in both seasons, with a combined ERA+ of 83 in 1995 and 82 in 1996. The starters (including Mark Leiter, Terry Mulholland, William VanLandingham, Mark Portugal, Trevor Wilson, Allen Watson, Mark Gardner and Osvaldo Fernandez) were bad, and the bullpen, other than Rod Beck and Jose Bautista in 1996, was no better. This explains the awful run differentials and winning percentages of those two years.

The 1962 and 1963 teams were very good, a pennant-winner and a third-place finisher, with Willie Mays, Willie McCovey, Orlando Cepeda and Felipe Alou driving excellent offenses. In fact, it was only the middle infield of Chuck Hiller and Jose Pagan that consistently hit below average as measured by OPS+ in those two seasons. While the pitching was of course good, too, with Juan Marichal, Jack Sanford and Billy O’Dell, it could not contribute enough to stay off this list.

1947 was the season the Giants set the record for most homers in a season, with 221. That record would not be broken until the 1996 Baltimore Orioles hit 257. But this group of mashers would famously be broken up by Leo Durocher so that he could build “his kind of team,” one with more speed and pitching.

The 1924 Giants won the pennant and was similar to the 1962 team in WAR provided by each side, hitting and pitching. The 1924 squad led the league in runs by far, and the pitching was good but not great. The 1927 team was good too, and saw the injection of Rogers Hornsby into the lineup for one season. They led the league in runs, but they finished third, two games out, because they allowed more runs than all but three teams in the league.

1944 saw the nadir of wartime baseball, and outside of Bill Voiselle, who pitched well, and Cliff Melton, who did not, the Giants did not have any real major-leaguers on the staff. Most the hitters were at least were major-leaguers, although some would have been retired had wartime player shortages not necessitated their employment in the majors. The offense was middling, but the pitching was seventh in an eight-team league in both ERA+ and Wins Above Average. And it was a seventh that was very far behind the sixth-place Cubs. (Although ahead of the Dodgers!)

As surprising as the Giants sweep of the Tigers in the 2012 World Series was, how the Giants got to the World Series is perhaps more surprising. While the 2010 Giants relied on their pitching to carry a moribund offense, the bats drove the 2012 club. San Francisco posted a 106 OPS+, just a single point behind league-leading St. Louis. For most of the season, the starting pitching, long the Giants’ strength, was pretty mediocre. The Giants FIP was seventh in the National League, dragged down by Barry Zito and a broken Tim Lincecum, both of whom would play huge rolls in the postseason run. Despite intermittent struggles by the offense in 2013, the Giants would finish with a team OPS+ of 101, third in the league. Madison Bumgarner was the only pitcher, however, to approach a top-level performance, while Matt Cain was ineffective for half the season, Lincecum was ineffective for all, Ryan Vogelsong was hurt and bad, and Barry Zito put up the worst season of his career. The 2013 pitchers put up a FIP of 3.80, eighth in the league and below the league average.

The 2000 Giants‘ hitters were almost the equal of the 1962-63 squads, with Barry Bonds, Jeff Kent and Ellis Burks leading the attack. The pitching was good enough to help the team win the West Division, with Livan Hernandez, Shawn Estes, Mark Gardner and Kirk Rueter all putting up average-ish ERA+ and FIP numbers, and Robb Nen and Felix Rodriguez being lights-out in the bullpen.

The 1914 squad finished second behind the “Miracle Braves,” but led the league in runs and OPS+. The pitching, although third in the league with a 2.92 FIP, was perhaps unlucky in that its ERA+ was only 90, last in the league.

Next time, we’ll look at Giant teams where the pitching dominated, and draw some preliminary conclusions about lopsided teams.