The Giants and the First All-Star Game 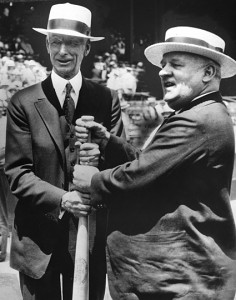 The first All-Star game was played in 1933 at Comiskey Park in Chicago. It is remembered largely because Babe Ruth, fat, stiff, and heading rapidly for obsolescence, hit a home run in the American League’s 4-2 triumph. National League manager John McGraw, who came out of retirement (alcoholism, prostate cancer, bad temper, general malaise) to manage the squad, had three pitchers to choose from: Wild Bill Hallahan (Cardinals), Carl Hubbell (Giants), and Lon Warneke (Cubs). Both Warneke and Hubbell brought sub-2.00 ERAs into the game and were well-rested. McGraw went with Hallahan. The Giants were then leading the Cardinals by 5.5 games in the National League pennant race. McGraw was still a Giants shareholder, and I find it entirely plausible that he selected Hallahan so as to avoid putting undue stress on his team’s ace. Or maybe he just chose poorly. The key lesson here is that when the opposing lineup has seven Hall of Fame types in it, the wise manager should avoid utilizing anyone with “Wild” in their name.