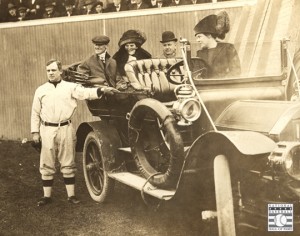 In his 1997 book, The Bill James Guide to Baseball Managers, Bill James created career All-Star teams for several prominent managers. The idea was to give a snapshot of the best seasons that the manager’s players had by position. For example, he did John McGraw, who managed the Giants from 1902 to 1932. Here are the position players:

Here are the pitchers:

I added the WAR column myself. These would be a lot of fun to do because it’s been 17 years since James did his version and we now have Giant managers like Dusty Baker and Felipe Alou whose entire careers are now in the books, as well as still-active Bruce Bochy.

It occurred to me, though, that James’ All-Star team method should more appropriately be applied to general managers. It is, after all, the general manager who determines which players the field manager will get to actually manage. There are no stats that rate general managers easily. We can compile their trades and look at WAR-in and WAR-out as a shorthand for winning and losing trades, but that’s time-consuming and not always terribly instructive given the many considerations that go into making a deal. It seems to me, though, that maybe it’s useful to see just how many standout seasons a general manager acquired for his team.

The first of those periods lasted ten years, from the time he took over the team as manager in July 1902, until November 1912. Although it was club owner Andrew Freedman who hired McGraw in 1902, in the winter of 1902-03, Freedman sold the Giants to John T. Brush, who at the same time sold his ownership stake in the Cincinnati Reds to buy the more prosperous New York franchise. Brush would prove to be the perfect club owner for New York, investing in the players, in the ballpark, and even building the steel-and-concrete Polo Grounds (which the Giants called “Brush Stadium” for a number of years) in 1911. He would become John McGraw’s friend and his unquestioning supporter in all matters, from the buying and trading of ballplayers and the setting of their salaries to the frequent conflicts in which McGraw was involved with umpires, rival managers and league officials. Not again in his lifetime was McGraw to have such a man at his side.

So let’s look at McGraw in his first stint holding the duties we today associate with a general manager. Who were the best players, at each position, during his term, and how many was he responsible for acquiring for the Giants?

*Meyers is listed along with Bresnahan because Bresnahan, in his first years with the Giants, also played the outfield, which means not all his WAR was accumulated while catching. As a catcher Meyers was as valuable.

You’ll first note that the stats I chose to use are a bit different than those James chose in 1997. WAR, as we said, did not exist then. I used OPS+ for the hitters to provide context, showing how much better than average each was as a hitter. ERA+ serves that same purpose for the pitchers. RBI and runs show how good one’s teammates are, not how good a particular hitter is. Similarly, wins and losses for pitchers are dependent on the whole team, not the man on the mound, so I jettisoned those stats.

McGraw obviously did quite well as a general manager from 1902 to 1912. Remember, though, he could sign any kid he wanted, and if money were necessary to purchase a player from another major-league team, Brush was ready with the cash. McGraw also made some good trades during this period.

So just how did he assemble the fellows who make up this “All-Star” team? In 1902, when McGraw was hired away from the American League’s Baltimore Orioles to manage the Giants, the two leagues were still at war, and often teams did not honor contracts of players in the rival league. When McGraw was wooed away from the Orioles, he took with him much of the best of the Oriole team: Joe McGinnity, Dan McCann, Roger Bresnahan, and pitcher Jack Cronin.

Upon arriving in New York to take over the Giants, McGraw found a great pitcher, Christy Mathewson, already on the roster. Before McGraw’s arrival at the Polo Grounds, Mathewson had been the top attraction on a bad club, but the pitcher felt no special allegiance to the New York club, even trying to jump to the American League’s St. Louis franchise in 1902.

McGraw understood that his club’s fortunes depended to a great extent on Mathewson, so in the spring of 1903 he went out of his way to cultivate the young pitcher’s friendship and trust. Spring training in Hot Springs, Arkansas, served as honeymoon for Mathewson and his new wife, Jane. Blanche McGraw made friends with the bride, and when the ball club returned to New York, the McGraws and Mathewsons agreed to share a ground-floor apartment at 85th Street and Columbus Avenue, near Central Park and the elevated train to the Polo Grounds. McGraw may not have discovered Mathewson, but he successfully made him an enthusiastic Giant.

McGraw scouted and signed Red Ames from Ilion and Hooks Wiltse from Troy, both in the New York State League, and bought Art Devlin from Newark of the International League. “Turkey” Mike Donlin had been McGraw’s teammate on the Orioles in 1901, and in 1904 he engineered a three-team trade to get him from Cincinnati.

McGraw was not the only one doing the scouting, though. In 1907, Dick Kinsella, the Giants’ fulltime scout and the first of his kind, found Larry Doyle playing for Springfield of the Three-I League. McGraw paid Springfield $4,500 for the second baseman, a record for a minor-leaguer. Among the newcomers at spring training camp in Marlin, Texas, in 1909 were Art Fletcher, a shortstop who, playing with Dallas the previous spring, had caught McGraw’s attention by outrageously riding him and the Giants; and John Tortes “Chief” Meyers, Mission Indian out of Riverside, California, who had been bought from St. Paul of the American Association. George Burns was bought from Utica in 1911, and McGraw spent two years converting him from a catcher into an outfielder who would be a regular with the Giants for eight seasons. Spitballer Jeff Tesreau, another Kinsella find, was purchased from Shreveport of the Texas League in 1910, and McGraw promptly farmed him out to Toronto of the Eastern League, where he could keep a closer eye on his development.

McGraw lived to teach young men how to play baseball. Over the course of his career, he took on many, many young men with little or no minor league experience, and worked with them until they became outstanding players. The list of such players during this first general manager stint includes Fred Snodgrass, Fred Merkle, and Larry Doyle.

In his autobiography, John McGraw wrote lovingly of his 1911 team, which won the first of three straight National League pennants:

I simply have a great love for it largely because of its speed on the bases and also because I developed nearly every man on that team. They were what you might call hand-raised. Other clubs I have built up by trades and shifts, by using what ability I may have for organization. Those 1911 boys, though, were my own.