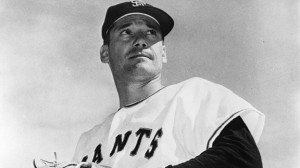 One way to appreciate Stu Miller is to use Baseball Prospectus’s stat WXRL.  WXRL attempts to tell us the number of expected wins a relief pitcher produced, above what a replacement-level pitcher would produce, adjusted for the quality of the opposing batters faced.  WXRL measures performance, how well a relief pitcher pitched, rather than whether he was awarded with a win or save.  If we take the top 200 seasons as ranked by WXRL, and counted how many times each pitcher appeared on the list, dropping those that only made it to the top 200 once or twice, we are left with 74 seasons:

First, pause a moment and think about just how good Mariano Rivera was, and for how long he was so good.

Call Stu Miller “Tim Lincecum 1.0.”  A little guy by the standards of pitchers — a teammate once described him as “a skinny, anemic-looking feller who seems to need a blood transfusion” — Miller was famous for having a deceptive delivery that involved a head-fake and a stellar changeup which he tried to spot low and away.  (Longtime TV analyst Joe Garagiola once said of Miller’s changeup: “You wait and wait and wait and wait and wait, and then you swing, and miss, and say: ‘I should have waited.'”)  A Swingman with the Cardinals and Giants through his 31st birthday in 1958 (going 14-26, 3.81 ERA in that time), Miller led the National League of 1958 in ERA (2.47) while starting in 20 games (posting a 3.01 ERA in 137 2/3 innings) and relieving in 21 others (0.81 ERA in 44 1/3 innings).  In 1961, new manager Alvin Dark got him out of the starting business for good.  He had a 2.72 ERA for the rest of his career, jumping into the elite of historic relievers.  Lest anyone confuse Dark with a brilliant manager, later that season the skipper threw away whatever advantage he gained from the move when he announced, “I am tired of my pitchers looking to the bullpen for help,” and decreed that his top three starters would pitch a complete game every time out.  Miller still recorded the 128th best season ever for a reliever.

When Miller’s ERA jumped from 2.66 to 4.12 in 1962, the Giants traded him to Baltimore, this after the Cardinals and Phillies gave up on him before the Giants did.  Thus, the fourth-best relief season of all time by WXRL (1965) took place on the Chesapeake rather than the San Francisco Bay.

Miller’s career had any number of strange notes in it.  In the minors he was once ejected in the seventh inning of a no-hit game.  He was the pitcher famously blown off the mound in the 1961 All-Star Game at Candlestick Park, he gave up Mickey Mantle‘s 500th home run, and he headed up the bullpen for the champion 1966 Orioles, but didn’t pitch in the World Series as manager Hank Bauer used just four pitchers in his club’s four-game sweep of the Dodgers.

And for those wondering, of course, Armando Benitez’s five great seasons immediately preceded his signing with the Giants before the 2005 season.