For Those Of You Keeping Score…

Posted on September 13, 2014 by Charles Johnson

Wow. Tonight’s game was just dreadful, but as a public service for those who wonder how it compares to Giants-Dodgers games of the past:

The last time the Dodgers scored at least 17 runs in a game against the Giants was on May 26, 1970, when the Dodgers won, 19-3, before 7,428 fans at Candlestick Park. Claude Osteen pitched a complete game for the Dodgers. That game had been the record for largest Dodger margin-of-victory until tonight.

Tonight’s game also ties the record for most hits by the Dodgers in a game against the Giants. The only other time the Dodgers got 24 hits was on August 13, 1932, when the Dodgers won, 18-9, at the Polo Grounds. San Francisco native Lefty O’Doul went four-for-five for the Dodgers that day. All his hits were singles, but he scored three runs. 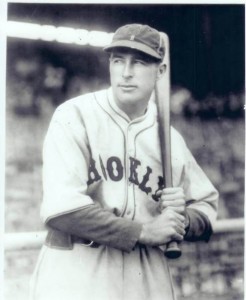 Lefty O’Doul, ca. 1932 as a Brooklyn Dodger. He would have the good fortune to be traded to the New York Giants the next year.