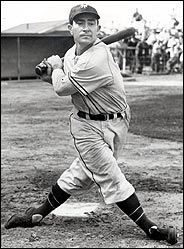 Danny Gardella was never a star. In 1945, he’d been good enough to hit 18 home runs for the Giants, muscling the ball down the Polo Grounds short foul lines for 12 of his homers. He was, however, an undisciplined batter with big holes in his swing, and he had some pretty big defensive liabilities, too. He could hit for distance, though, and manager Mel Ott had to go along with him because, in the fourth year of ball during World War II, he had no one better.

Gardella was a prankster, too. On a night trip into Chicago, Gardella climbed into the luggage rack above his seat and tied himself to it with his belt, waiting for team secretary Eddie Brannick to come through on his nightly check. Then he swung down and dangled there before the startled and enraged executive. “Brannick didn’t regard it as a joke,” Gardella was to recall, “but took it instead as a reflection of his inability to get us a sleeper into Chicago. He never really cared for me after that.”

In the off-season of 1945-46, the Giants sent Gardella a contract calling for a $500 raise to $5,000, and Gardella sent it back unsigned. When the team train left New York for spring training in Miami in February, Gardella still hadn’t signed — and he missed the train. He subsequently arrived at the club’s Venetian Hotel headquarters late, unshaven, and broke.

“The war was over,” Gardella later explained. “Johnny Mize was coming back, Sid Gordon, Willard Marshall — all those good ballplayers. It wasn’t that they [the Giants] wouldn’t have considered me, because I was on the way to improving. But I got down to Miami late, and when I went into the dining room to get some money from Brannick I wasn’t looking too good. They always wanted you to wear ties, whereas I didn’t have what you might call the sartorial elegance of a big leaguer.”

Brannick told Gardella he wouldn’t get a penny until he signed his contract, and words were exchanged. The Giants might have tolerated Gardella’s rebellious attitude during the war, but not when they didn’t have to, not from a mediocre player who at 5’7″ didn’t even look the part of a Giant. The Giants released Gardella promptly, and no other big league team made him an offer.