A Stairway to Giants History

Posted on September 2, 2014 by Charles Johnson 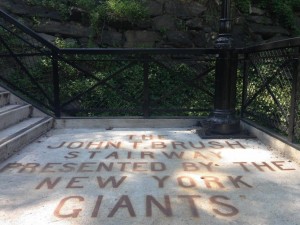 The Polo Grounds, the Harlem home of the New York Giants, has long been the site of an imposing public housing project, The Polo Grounds Towers, four 30-story skyscrapers with 1,616 units. Few clues remain about the glorious things that happened when the Polo Grounds was a major-league ballpark in Washington Heights. The ballpark saw Christy Mathewson, Mel Ott, Carl Hubbell and Willie Mays; Merkle’s boner and Thomson’s homer; the Floyd Patterson-Ingemar Johannson fight; the Negro Leagues’ New York Cubans; both the football Giants and Jets; and the birth of the New York Mets.

One relic remains, however, the result of accident rather than historic preservation. That relic is a stairway, built down the side of Coogan’s Bluff, the hill that overlooked the ballpark, roughly where Edgecombe Avenue runs today. The stairway ran down the hill to a ticket booth just outside an entrance to the ballpark. Coogan’s Bluff was where those unable to afford or unwilling to buy a ticket had a clear, if distant, view of some of the action on the field.

On July 9, 1913, at a ceremony under Coogan’s Bluff, the New York Giants presented “The John T. Brush Stairway” to the City of New York. The Giants’ President Harry Hempstead presented the stairway in honor of his late father-in-law, who had owned the team until his death in 1912. Maybe the Giants hoped a new stairway down the bluff would prompt a few of the cheapskate fans to buy a ticket.

After decades of deterioration since the Giants left for San Francisco in 1957, the stairway recently underwent a $900,000 reconstruction, funded in part by the San Francisco Giants. It was supposed to reopen two years ago, but it being rare for any construction project in New York to run on schedule, the stairway instead opened in August of this year. The steel letters on one of the stairway landings, visible in the photo above, are the only parts of the original stairway that were retained during the reconstruction. These letters are quite possibly one of the very last physical links to the old ballpark in Harlem.