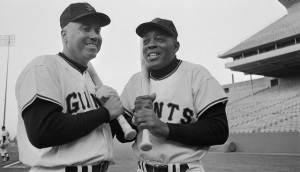 Duke Snider and Willie Mays in 1964, their only year as teammates.

Most Strikeouts by a Pitcher:  Juan Marichal, 206

Top Prospect:  In retrospect, Bobby Bonds. But making more noise in 1964 were outfielder Ken Henderson, signed just six weeks before Bonds. Henderson would make the 1965 Giants at age 18, and get 83 plate appearances that season. In 1964, future Giant catcher Dick Dietz had an .833 OPS at Tacoma of the PCL.

1964 uniform, courtesy of “Dressed to the Nines,” the uniform database at http://exhibits.baseballhalloffame.org/dressed_to_the_nines/

Memorable Quotation:  “We have trouble because we have so many Spanish-speaking and Negro players on the team. They are just not able to perform up to the white ball player when it comes to mental alertness.” — Giant manager Alvin Dark, quoted by reporter Stan Isaacs, who had interviewed Dark for Newsday.

What Went Right:  The club was part of a four-team race to the finish in 1964, with Willie Mays leading the league in homers with 47. Jim Ray Hart and Jesus Alou became regulars and impressed. Juan Marichal, despite an injury that cost him six starts, was fabulous.

What Went Wrong:  Injuries to Willie McCovey and Juan Marichal may have cost the Giants the pennant, but what really went wrong was the manager, Alvin Dark. As the quotation above, one of several damning ones in the interview, showed, Dark had compartmentalized his team, whites in one group, non-whites in another. Pride and mental acuity were strictly white commodities. (The players, of course, had recognized this compartmentalization during Dark’s first week as skipper in 1961.) After the interview was published, owner Horace Stoneham, by now no fan of Dark anyway, wanted to fire the manager immediately, and even planned to fly to Cincinnati to do so in person. Chub Feeney talked him out of doing it mid-season, and team captain Willie Mays, in a meeting with the non-white players, convinced them not to quit on Dark. Mays pointed out that what motivated Dark most was money, and in the quest for it, Dark put his bigotry aside. The manager always, Mays said, fielded the best possible lineup, and when Marichal was on the mound, that lineup only had two whites in it. Above all, Mays did not want the press writing about non-white players quitting on their manager. Stoneham fired Dark on the final day of the season.