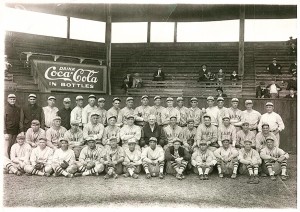 Most Strikeouts by a Pitcher:  Burleigh Grimes, 102

Top Prospect:  Lefty O’Doul, OF, was drafted by the Giants on October 4 from San Francisco (PCL) in the 1927 Rule Five draft.

The Giants 1927 uniforms (illustration courtesy of “Dressed to the Nines,” http://exhibits.baseballhalloffame.org/dressed_to_the_nines/introduction.htm

Memorable Quotation:  “He had a good way of making everybody irritated.” — Giant shortstop Travis Jackson, describing how, during his only year with the Giants, Rogers Hornsby alienated almost everyone.

What Went Right:  Rogers Hornsby led a potent hitting attack that tied with Pittsburgh for the league lead in runs scored.

What Went Wrong:  The pitching struggled, giving up the third most runs in the league. Further, as Jackson said, Hornsby rubbed everyone the wrong way. McGraw had made Hornsby captain, and Hornsby organized the first spring training workouts. His teammates thought he presumed too much. Then McGraw’s chronic sinusitis developed into an infection of his eye and the side of his face, and he was forced to take time off. Hornsby was given command, and the team did well. But on September 22, in Pittsburgh, when Giants Secretary Jim Tierney came to Hornsby’s hotel room to criticize Travis Jackson’s defense, Hornsby cursed Tierney and kicked him out of his room. Later that night, Stoneham arrived with McGraw, who was ready to resume managing. Stoneham was livid when he learned the club secretary, his close friend, had been bawled out by a ballplayer, even if the ballplayer was Rogers Hornsby. Stoneham would trade the Rajah to the Boston Braves in January.