Which Pirates Hit the Giants? 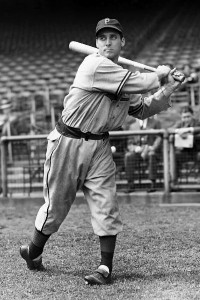 The Pittsburgh Pirates have had many great hitters, including Honus Wagner, Kiki Cuyler, Ralph Kiner, Roberto Clemente and Willie Stargell. Which Pirate, however, with at least 100 at-bats against the Giants, has done the best batting against them since 1914? It’s Johnny Rizzo, a journeyman who in two years with the Pirates (1938-39) and 114 at-bats against the New York Giants, hit .360/.467/.570, for an OPS of 1.037, 41 points more than runner-up Richie Zisk. Rizzo also has the biggest gap between his OPS against the Giants and his OPS against the National League as a whole during those two years with the Pirates (.833).

Others on the list? Bill Madlock is #31. Freddy Sanchez is #18. Barry Bonds is #4, which makes him Mark Portugal before Mark Portugal.