Which Giants Have Thrown a “Porcello?” 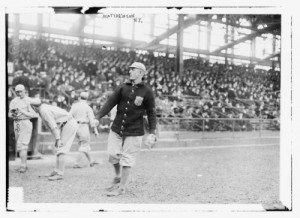 Christy Mathewson, 1914 (courtesy of the Library of Congress)

On July 1, Rick Porcello of the Detroit Tigers shut out the Oakland Athletics, 3-0. The amazing thing about the shutout was that Porcello did not walk nor strike out a single batter. Using Baseball Reference’s wonderful Pitching Game Finder, we can go back as far as 1914 and find that only 67 different pitchers have accomplished this feat.

Joe Posnanski has a great post on the increasing rarity of the no-walk-no-strike-out-complete-game shutout. (He names the occurrence the “Porcello.”) Posnanski explains that when hitters hit the ball they are hitting it harder, and that batting averages on balls in play – when we include home runs (which are not ordinarily a part of the BABIP stat) – have “skyrocketed” in the last 20 years. Twenty-two of the top 23 averages on balls hit have occurred since the 1994 strike year.

Posnanski goes on to describe the increasing success of hitters when they actually hit the ball, and why he thinks this is happening. (His reasoning makes sense to me.) He also explains some of the reaction to this, including that pitchers (and managers) have realized their one defense against those hard-swinging batters is to strike them out, so they are throwing much harder in much shorter appearances. Posnanski also explains how he suspects baseball might evolve as all this plays out. (The whole piece is well worth a read.)

So which Giants, since 1914, have thrown complete-game shut outs without walking or striking out a batter? Here’s a table: