Which Cardinals Hit the Giants?

Posted on September 12, 2014 by Charles Johnson 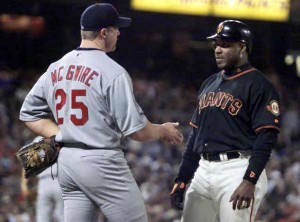 The St. Louis Cardinals rank with the San Francisco Giants as the most successful franchises in the National League. Whether by pennants or World Series championships or Hall-of-Famers, both franchises have been more successful than their competitors in the league. Which Cardinal, however, with at least 100 at-bats against the Giants, has done the best batting against them since 1914? It’s Mark McGwire, the most prolific home-run hitter in the history of the major leagues. In five years with the Cardinals, McGwire had 159 plate appearances against Giant pitchers, and he hit .295/.497/.732, for an OPS of 1.229, 149 points more than runner-up Ron Northey. Northey has the biggest gap between his OPS against the Giants and his OPS against the National League as a whole during his years with the Cardinals (1.080 against the Giants, compared to .862 against the NL).