Which Athletics Hit the Giants?

The Oakland Athletics may not be in the National League, but due to the inception of interleague play in 1997 (yes, this travesty has been going on that long!), and due to the fact that Major League Baseball has designated the Giants and the Athletics as “geographical rivals,” the two teams play a home-and-home series each season. So it should be no problem to find Athletics hitters who have had at least 100 at-bats against the Giants, and to see whom among them has had the most success against the Giants. 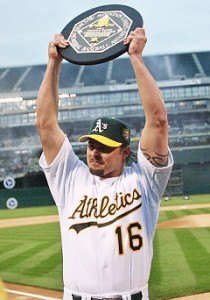 This entry was posted in Uncategorized and tagged hitting, Oakland Athletics, opponents. Bookmark the permalink.