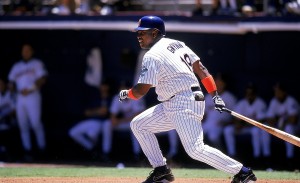 As he is remembered.

Tony Gwynn, one of the greatest baseball players in history, passed away far, far too young. Though the Padres are not in the innermost circle of hell the way the Dodgers are, there is a Giant rivalry with the Padres. Yet I have never heard a Giant fan say anything bad about Tony Gwynn. And Gwynn hit .351/.399/.468 in 965 plate appearances against the Giants. Anyone else who’d have hit like that against the Giants would have been loathed, particularly had he, like Gwynn, done it for a team in our division.

Instead, Giant fans always thought when they saw him come to the plate, “Oh, no, not Gwynn again.” We knew he was going to hurt us, but all we could do was marvel as he practiced his craft. It was a craft he studied, talking to other players about hitting, taking swings in the batting cage, and, years before laptops and tablets, lugging his own video equipment from ballpark to ballpark so all his plate appearances could be recorded, broken down, analyzed. But the student was not a grind; no one took more joy in the game of baseball than Tony Gwynn.

I have no specific Gwynn memory. He was always at the plate, always at the wrong time. All those hits blend together. Despite all the times he helped the Padres beat the Giants, he was still our favorite enemy. He was too nice, too gracious, and too respectful of his opponents, for us to get angry at him.

This entry was posted in Uncategorized and tagged opponents, Tony Gwynn. Bookmark the permalink.