Posted on September 16, 2014 by Charles Johnson

Before a game at Forbes Field, the Giants’ mascot, Charles Victory Faust, strikes out Honus Wagner on three pitches, to the delight of the 20,000 fans. 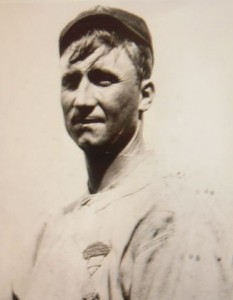 The early twentieth century was a period in which almost all ballplayers had some kind of superstition. Besides the usual business about rabbits’ feet, black cats, and numbers, many of them also believed in the magical effects of being blessed by somebody cross-eyed or rubbing a hunchback’s hump. Christy Mathewson himself once wrote that many players, some on his own club, would rub the heads of “colored kids for luck.” As benighted as such a practice was, ballplayers echoed many of the racial stereotypes common in the country. In such matters, Mathewson did not appear to be an exception. His college education failed to erase such biases.

John McGraw believe that passing empty beer barrels on the way to the ballpark was bound to produce dividends. (Naturally, on many occasions, he craftily arranged for his players to encounter such barrels en route to the Polo Grounds.) By the time they clinched the pennant in 1911, most of the Giants and even McGraw himself were quite ready to believe that the supernatural had figured at least partly in their success. They believed in Charles Victory Faust.

Charlie Faust had grown up on a farm outside Marion, Kansas. Thirty years old, tall and husky and with absolutely no athletic ability, Faust had convinced himself that he was destined to be a star pitcher for the New York Giants. He was in fact, insane.

Early in the 1911 season, McGraw received a wire from Faust, offering the Giants his services for the season. Of course, McGraw threw it away and forgot all about it until Faust showed up late in July at the St. Louis hotel where the Giants were staying while playing a series against the Cardinals. McGraw and a few of his players decided to humor Faust, and the next day McGraw and Cardinal manager Roger Bresnahan put Faust through an exhausting but ludicrous workout. The Giants won that day, and with Faust sitting on their bench in uniform, swept the four games in St. Louis.

Having tired of Faust and the joke, though, McGraw sent him back to the hotel on the pretext of picking up his contract, jumped aboard a waiting Pullman with his players, and left Faust in St. Louis. The Giants lost their next series, in Chicago, and when they returned to New York and found Faust already there waiting there for them, a number of the players wanted him back on the bench. So once again, Faust thought he was a member of the team.

Faust sometimes assisted Dick Hennessey, the Giants’ batboy; sometimes took batting practice; sometimes warmed up as if he genuinely expected McGraw to turn to him in the late innings. Mostly, he just hung around, serving as an increasingly credible good-luck charm. Because with “Victory,” as the Giants started calling him, in uniform and cheering on his “teammates,” they won nearly all the time. “This peculiar character has worked wonders as a mascot in McGraw’s camp,” reported Ernest J. Lanigan of the Sporting News in mid-September. Connie Mack ventured that Faust had become a real asset to the Giants, as much as the little hunchbacked mascot, Louis Van Zeldt, had been for Mack’s Philadelphia Athletics. McGraw played along, telling Lanigan he would rather lose any player on the team than Faust.

In fact, it was the fierce competition of the New York press (the city then had twelve daily papers) that made Faust. The sports pages of these newspapers created repeat readers, and one way they did it was by creating “characters” for their readers to follow from day to day. Sid Mercer of the Globe, Damon Runyon of the American, and others latched on to Faust as ideally suited to these needs. They managed to portray him as a sort of idiot-savant, indispensable to the Giants’ success. Mercer even created the requisite middle name, “Victory,” for his new character. (The press’s role in creating the Victory Faust phenomenon is explored well by Gabriel Schechter at the National Pastime Museum.)

Charlie Faust actually appeared in two ballgames. On October 7, with the pennant clinched, McGraw let him pitch the top of the ninth inning in a game with Boston at the Polo Grounds. The Braves cooperated in the show, intentionally making three outs, giving Faust a turn at bat in the bottom of the inning even though the Giants’ third out had already been made. Faust tapped the ball back to the pitcher, and the Braves threw the ball around the infield, until Faust, lumbering home, was tagged out by catcher Bill Rariden. Five days later, in the nightcap of a season-ending doubleheader loss to Brooklyn, Faust again came on in the ninth inning. Brooklyn, like the Braves in on the joke, accidentally scored a run off him. Hit by a pitch when he came to bat, and allowed to steal second and then third, Faust scored on Buck Herzog‘s infield out as eight thousand fans laughed and cheered.

Faust was on hand in New York to greet the Giants upon their arrival from spring training in April 1912. As far as McGraw was concerned, though, the Giants’ loss to the Athletics in the 1911 World Series proved that whatever magical influence Faust once had, he had become more annoying than amusing. McGraw did agree, though, to let Faust sit in the Polo Grounds dugout, in his street clothes, as long as he stayed out of the way.

The Giants would go on to win the pennant again, and in the triumphant team photograph, Charlie Faust, given a uniform for the day, stands proudly alongside Larry Doyle. Believing that “Lulu,” his imaginary sweetheart, was calling him home, Faust decided to skip the World Series and head back to Kansas. Later, after moving to the Pacific Northwest, he would become so deranged that his brother would have him committed to the Western Hospital for the Insane at Fort Steilacoom, Washington. There Faust would die of tuberculosis in June 1915 at the age of thirty-four.