At the Polo Grounds, the score is 1-1 between the Giants and Braves when umpire Jocko Conlan calls time in the seventh inning. The crowd and the two teams then listen for 45 minutes to President Roosevelt’s live radio message about the war in Europe is piped over the loudspeakers. When play resumes‚ the Braves lift Jim Tobin for Manny Salvo‚ while the Giants take out starter Hal Schumacher‚ replacing him with Carl Hubbell. Hubbell’s single wins it for New York‚ 2-1. 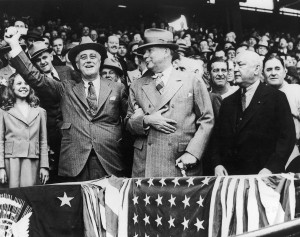 President Roosevelt throwing out the first pitch of the season, Griffith Park, Washington, April 14, 1941. He is on the arm of General Edwin “Pa” Watson, White House chief of staff. Clark Griffith, owner of the Washington Senators, is over Watson’s left shoulder. Left to right from Griffith are Senators manager Bucky Harris, unidentified, and Yankees manager Joe McCarthy.

Though President Franklin Roosevelt had by now concluded that the United States would ultimately have to join the fighting in Europe, he remained uncertain about how to proceed. On May 17, 1941, he told Secretary of the Treasury Henry Morgenthau that he was “waiting to be pushed into this situation.” Morgenthau took him to mean that “he wanted to be pushed into the war rather than lead us into it.” At a cabinet meeting on the 23rd, when some participants expressed hope that the president would use a speech scheduled for May 27 to declare the country “ready to do something,” he replied, “I am not willing to fire the first shot.” So it seemed to Secretary of the Interior Harold Ickes that Roosevelt was still waiting for the Germans to create an “incident.”

But with German forces now driving the British out of Crete and the Bismarck, the most heavily armed ship afloat, on the loose in the Atlantic after destroying the Hood, Britiain’s largest and fastest capital ship, Roosevelt felt compelled to take some meaningful step. If the Bismarck showed up in the Caribbean, he would consider ordering American submarines to sink her. But his belief that the people might then demand his impeachment persuaded him to lay aside the idea.

For the moment, Roosevelt decided to restrict himself to a forceful speech proclaiming an unlimited national emergency. The Nazis, he warned, were waging a war for world domination, and “unless the advance of Hitlerism is checked now, the Western Hemisphere will be within range of the Nazi weapons of destruction.” Recent German successes gave Hitler the power to occupy Spain and Portugal, the “Atlantic fortress of Dakar,” and the island outposts of the New World — the Azores and the Cape Verde Islands.” This he said, would put the Nazis only seven hours’ flying distance from Brazil and in a position to dominate South American shipping lanes. It would jeopardize “the ultimate safety and security of the United States itself.”

To resist the Nazis, Roosevelt also said, the Allies must have “control of the seas.” In the Battle of the Atlantic, where the Axis powers were “risking everything they have, conducting desperate attempts to break through to the command of the ocean,” the Germans were now sinking merchant ships at a rate more than twice the combined Anglo-American output. To meet the peril, the United States would have to step up its shipbuilding program and its patrolling of the high seas. If Britain, upon which “control of the seas” depended, were to survive, the United States would have to assure delivery of needed supplies. “This can be done; it must be done; and it will be done,” Roosevelt declared. Closing with reassertions of the American doctrine of freedom of the seas, of the solidarity of the twenty-one American republics and of Canada, and of determination to give the democracies material support, he “issued a proclamation that unlimited national emergency exists and requires the strengthening of our defense to the extreme limit of our national power and authority.”

The speech received an enthusiastic response both at the Polo Grounds and around the nation. But it left unclear whether any concrete actions would follow the president’s proclamation. The talk “was calculated to scare the daylights out of everyone . . .,” one of its authors observed, “but it did not do much else.” In a press conference the next day, Roosevelt said he had no intention of issuing the executive orders needed to implement the declaration of unlimited emergency, and promised no additional follow-up to his speech. Roosevelt, ever careful to take the public’s temperature before engaging in any action, viewed the enthusiasm for his speech as resulting from the fact that he did not go beyond a general discussion of the Nazi threat and into controversial details for meeting it. While he believe the public would strongly line up behind intervention if a major incident demonstrated the need for a fight, he did not feel that he could evoke this response simply by what he said or did.

The “Recommended Reading” widget on the home page includes sources I used in preparing this post. (I didn’t use the Creamer book, but it is a good book. For more detailed citations, just ask in the comments.

This entry was posted in This Day in Giants History, Uncategorized and tagged 1941 Giants. Bookmark the permalink.