This Day in Giants History, May 12, 1995: Matt Williams Sorta Breaks a Record 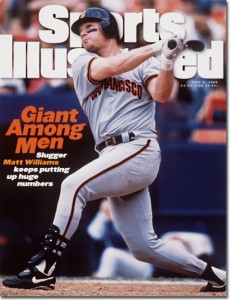 The 1994 season produced a prodigious home-run derby between Matt Williams of the San Francisco Giants, who had 43 home runs after 115 games, and the Seattle Mariners’ Ken Griffey Jr., who had 40 after 112 — until the game was shut down by a players’ strike. Whether Williams would have broken Maris’s record hung in the air after the August 12 player walkout, and the issue took on new life as Williams began the shortened 1995 season right where he left off.

“I believe he would have broken Maris’s record, but I didn’t say it last year because I didn’t want to put any pressure on him,” Giant hitting coach Bobby Bonds told Sports Illustrated as Williams kept right on hitting in 1995.

At the time, Williams himself gave most of the credit for his success at the plate to his hitting coach, with whom he had developed a close relationship. Bonds taught Williams patience and how to shorten and quicken his swing to generate bat speed. Whenever Bonds, who also coached first base, saw Williams doing something wrong at the plate, he might flash a signal or motion to a part of the body. Usually, Williams managed to make the correction during that plate appearance.

Giants fans did not know it at the time, but Williams was at his peak. If baseball could have squeezed in a 162-game season in 1994, he might have broken one of baseball’s most hallowed records.