At the Polo Grounds‚ Christy Mathewson beats the Cardinals, 3-2‚ for his 20th straight win over St. Louis stretching back to June 16‚ 1904. Art Fromme takes the loss. Matty allows four hits and strikes out eight‚ including Joe Delahanty three times. He also walks two in a row‚ an unusual occurrence. 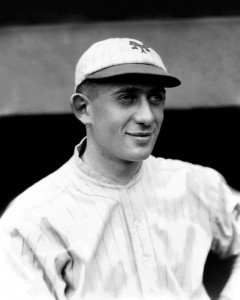 Wow. Twenty in a row against the Cardinals. While we should remember that the early-twentieth-century Cardinals were not a good team, this is still somewhat impressive. It made me wonder what other Giant pitcher have mounted long streaks against a particular opponent. Baseball Reference’s tools for compiling such information will only take us back to the 1914 season, so that will have to do.

A lot of this is what we might expect. Some of the Giants’ very best pitchers are on this list, and the victories are against teams that were not good at the time. The Phillies and the Pirates in some of their worst seasons are here, and Juan Marichal and Gaylord Perry beat up on expansion teams.