This Day in Giants History, June 20, 1912: Ernie Shore Blows His First Chance in the Bigs 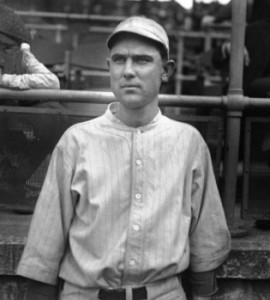 Tall and awkward, Ernie Shore never liked the farming he had to do as his family raised tobacco in North Carolina. So in 1910 he enrolled at Guilford College in Greensboro, N.C., the only Quaker college south of Philadelphia. He hoped to become a civil engineer, and he would teach mathematics at Guilford in the off-seasons after graduating in 1914.

Shore pitched  on the college’s baseball squad, and his coach, Chick Doak, was a friend of John McGraw‘s. McGraw, upon hearing of Shore’s exploits (his college record was 38-8-2), asked Doak to send Shore to New York for a trial in 1912. The Giants thus acquired “the thinnest pitcher in captivity, the New York Times wrote. Shore actually stood 6-feet-4 and weighed about 180 pounds.

McGraw used the raw right-hander almost exclusively to pitch batting practice. On June 20, however, he sent in Shore to relieve Hooks Wiltse in the ninth inning of a 21-2 blowout in Boston. The outing went badly. Shore got an unmerciful pounding, the Braves scoring ten runs on ten hits.

Although only three of those runs were earned, and the Giants won, 21-12, McGraw never used Shore again. In September, the Giant skipper farmed Shore out to Indianapolis. Shore saw the move as an attempt to deprive him of his share of the anticipated World Series winnings, and he told McGraw he would not report to Indianapolis. The irascible McGraw then suspended Shore, who went home to North Carolina without not only a World Series share but without any pay for the time he would have spent in Indianapolis.

Shore would do okay in baseball, though. In January, he paid a $25 fine to gain reinstatement by the National Commission. He worked his way up from Greensboro in the North Carolina State League to Jack Dunn‘s Baltimore Orioles in the International League. In 1914, Dunn packaged Shore with pitcher George Ruth and Ben Egan, selling them to the Boston Red Sox. Shore would have success in Boston, where at first he was a bigger star pitcher than his road roommate Ruth. (Shore would live for a time in the home of Mayor John “Honey Fitz” Fitzgerald.) The Red Sox won two World Series with Shore in their starting rotation, something Shore probably would not have experienced with the Giants.

Eventually, Ruth’s star would eclipse Shore’s, but they hold the distinction of combining on a no-hitter. In a 1917 game, Starter Ruth was ejected after walking the first batter, Shore entered in relief, Ruth’s runner was thrown out trying to steal second, and Shore retired the next 26 batters. Shore would pitch for the Red Sox until 1920, when Boston traded him to Vernon of the Pacific Coast League.

We may never know whether or how much John McGraw regretted the snap judgment to suspend the youngster in 1912.

This entry was posted in This Day in Giants History, Uncategorized and tagged 1912 Giants, Ernie Shore, John McGraw. Bookmark the permalink.