This Day in Giants History, June 17, 2005: Tyler Walker Strikes Out the Side 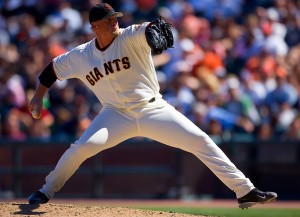 That’s called slamming the door. Jason Schmidt of the Giants pitches eight shutout innings against the Tigers‚ but gives up singles to the first three hitters in the ninth. Tyler Walker relieves with the bases loaded and proceeds to strike out three straight batters for the save as the Giants win‚ 4-0. Walker is the only one to do this – strike out the side in the final inning with the bases loaded – since the save became an official stat in 1969.