This Day in Giants History, July 22, 1910: Bugs Raymond Gets Himself Suspended

Bugs Raymond, talented but hard-drinking spitball pitcher, walks the winning run home in New York’s fourth straight loss to the Pirates. When Raymond shows up drunk for his next start, in St. Louis, manager John McGraw suspends him for the rest of the season. 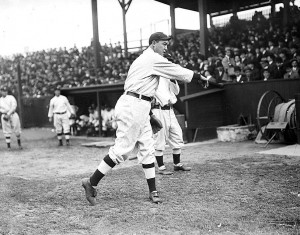 Late in 1908, Giant manager John McGraw, never one to let sentiment interfere with how he constructed his roster, traded his friend Roger Bresnahan to St. Louis so the catcher could manage the Cardinals. One of the players McGraw got in return was spitball pitcher Arthur “Bugs” Raymond. Raymond had a losing record (15-25) in 1908, but he had pitched more than 300 innings, and McGraw knew better than to judge a pitcher by his record. Raymond had a 2.03 ERA (ERA+ of 116) and McGraw saw value in that.

But Raymond, twenty-six years old, was an alcoholic, already the subject of jokes and stories around the league. Like many drunks, Raymond was often unintentionally funny and generally well-liked. Some said he didn’t actually spit on the ball but blew on it, so that it came to the plate drunk. Raymond once observed, when somebody said that Fred Tenney was ambidextrous, “Yeah, he’d shoot you in a minute.”

Yet Raymond was also a pathetic young man who would never be able to make much of his life. With Raymond, as with many other problem ballplayers he acquired during his managerial career, McGraw thought he could work a transformation where others had failed. Trying to reform Raymond would severely test and eventually exhaust his determination and forbearance. “I believe that worrying over Bugs Raymond took five years off my life,” he later told an interviewer.

Raymond pitched well in the first and last parts of the 1909 season. (He ended up with an ERA just a bit better than average.) In between, he ran into trouble with himself and McGraw. In June, after pitching a fine 2-1 victory in Cincinnati, Raymond celebrated in a hurry and boarded the Pullman car for the trip to Pittsburgh quite drunk. McGraw confronted him, and players who were there reported that the manager lost his temper and started swinging wildly at the pitcher. Thinking that McGraw was being playful, Raymond simply fended him off. Told later that McGraw’s attack had been for real, Raymond said, “Why, if I’d known the little bastard was serious, I’d have killed him.”

McGraw didn’t suspend Raymond on that occasion, but he fined him so severely that the pitcher threatened to jump the team when he found his next pay envelope almost empty. “Great pitcher,” McGraw lamented to a Pittsburgh sportswriter, “but you know a man cannot pour thirty-five drinks of beer a day and stay long in baseball.”

McGraw resorted to assigning a private detective to trail Raymond exclusively and report on the pitcher’s activities. Raymond took the surveillance in stride. The first detective was fired after Raymond converted him into a drinking companion. Raymond would introduce another, named Fuller, to his friends: “This is my keeper. I’m full but he’s Fuller.” Damon Runyan would report that eventually Raymond and Fuller had a falling out, and Fuller punched Raymond in the eye. Raymond complained to McGraw, who punched him in the other eye.

McGraw would use the detectives’ daily reports in confronting Raymond about his drinking: “Yesterday,” a typical report began, “the party started down Eighth Avenue after the game and went into every saloon. He had a beer and hamburger at 151st Street; he had a rye and beer chaser at 147th Street; he had five beers at 145th Street; he had a rye and hamburger with onions at 143rd Street.” Raymond’s only response to that particular report was to tell McGraw that he hadn’t had onions on that last burger.

Late in August, Raymond went on another binge, and McGraw showed his disgust by letting him take a ten-run pounding in front of the New York fans. A month later he suspended the spitballer for the balance of the season. Raymond’s losses from fines and suspensions amounted to $1,700 of his $4,200 salary, although, according to some reports, McGraw sent most of that money to Raymond’s wife, without his knowledge. (In fact, eventually McGraw would arrange for Raymond’s entire paycheck to be sent to his wife regularly. As a result, when McGraw once asked Raymond to warm up to go into a game in relief, the pitcher told him to have Mrs. Raymond warm up, since she was the one getting paid for his work.)

When Raymond reported to Marlin, Texas, late in February 1910 for spring training, he claimed to have just set a personal record by not taking a drink since leaving his home in Chicago a week earlier. McGraw gave him the occasional dime or quarter for a soft drink or candy in Marlin, and Raymond stayed sober. The Giants played an exhibition in Dallas on their way out of the state in early April, and at a banquet in their honor at the Oriental Hotel, Raymond wandered back into a kitchen annex and discovered paradise, a long tableful of cocktails set out for the banqueters but not yet picked up by the waiters. By the time somebody came looking for him, he’d downed at least a dozen drinks.

Although he sobered up and traveled east with the team, Raymond pitched erratically on the exhibition route. Once the season began, he hurled one outstanding game, going all the way in a thirteen-inning victory over Philadelphia, before a disastrous appearance at the Polo Grounds in mid-June. Called into relief in the top of the ninth inning, with New York ahead, 3-2, he hit two batters, gave up two hits, and made a wild throw to first. The Pirates scored four times and won the game. As McGraw learned afterward, when Raymond had gone to warm up behind the rightfield bleachers (out of the manager’s sight), he’d headed for a saloon across Eighth Avenue and traded the warmup ball for several shots of cheap whiskey. Then he returned to the ballpark just in time but in no condition to take the mound.

Again McGraw suspended Raymond; again, after a few weeks, he relented. But when Raymond walked in the winning run at Pittsburgh (for the Giants’ fourth straight defeat there) and then went to the St. Louis ballpark obviously drunk, the manager had reached the limits of his patience. Suspended for the rest of the season but not released, the spitballer returned to Chicago and, under an assumed name, began pitching for a local semi-pro team.

Despite all this, McGraw had Raymond back in Marlin in February 2011, and the pitcher was the model of proper deportment. Supposedly cured of his alcoholism at an Illinois clinic during the off-season, Raymond reported to the Giant camp weighing 220 pounds, forty above his playing weight. But he worked hard, trimmed down, stayed sober, and seemed actually to have reformed. In exhibition stints in Greensboro, North Carolina and Baltimore on the trip north, he looked good.

But during the season, Raymond was of little use to the Giants. He pitched well enough over the first two months, but then in late June he fell from grace for good. When the team got off the train in Pittsburgh, Raymond was nowhere to be found. He soon materialized with the story that he’d ridden all the way from Philadelphia with the locomotive engineer, an old friend. McGraw didn’t know what to make of that, but accepted it. He did not accept, though, Raymond’s floundering pitching throughout the road trip. When Louis Drucke tired in St. Louis, and McGraw called in Raymond, Bugs yielded all of the Cardinals’ runs in their 8-4 victory. Convinced that Raymond had been swiping tip money in hotel dining rooms and imbibing as much and as often as he could manage, McGraw hit him with a $200 fine and again suspended him for an indeterminate time.

So Raymond was not part of the team that would ultimately win the 1911 National League pennant. McGraw did not ask Raymond to come to spring training in 1912, and made no disposition of his contract, so that while Raymond remained on New York’s reserve list, the only money he received for playing baseball was what he was paid by local semi-pro teams in Chicago.

One day, early in September, Raymond went as a spectator to a ballpark on the city’s northwest side, where he quickly got into a disagreement with several local toughs. Knocked down and repeatedly kicked in the head, he suffered a skull fracture. Two days later, at the age of thirty, he died in the little rundown hotel where he’d been staying with his wife and two children.

It is not likely that anybody with the Giants shed a tear over the violent, pathetic death of a man who’d been their teammate only a year earlier. Professional baseball left little room for sentiment, as opposed to the heavy sentimentalism in which its promoters, then and later, liked to engage when they talked about baseball’s wholesome, uplifting qualities and its vital place in the life of the nation.