Outfielder Casey Stengel, along with second baseman Johnny Rawlings and pitcher Red Causey, are traded from the last-place Phillies to the second-place Giants for infielder Goldie Rapp and outfielders Lance Richbourg and Lee King. 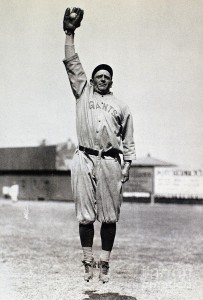 Stengel as a Giant (Library of Congress)

At one point, early in his career, Larry Doyle famously said, “It’s great to be young and a Giant.” By the beginning of 1920, he was neither. John McGraw sought to plug the hole by moving Frankie Frisch back to second base, and bringing up Joe “Goldie” Rapp to play third. Rapp was twenty-six years old, though he looked older, and this was his first time in the big leagues after seven seasons in the minors. McGraw had been advised that after a solid season at St. Paul in 1920, Rapp was ready. It turned out, though, that he was not. He wasn’t fast enough and he could not hit big league pitching, and it didn’t take McGraw long to find out a mistake had been made.

What McGraw wanted was the best third baseman in the league, Heinie Groh from Cincinnati. Groh had been a Giant back in 1911-13, but was a boy then and got little playing time on a Giant team rushing for pennants. McGraw couldn’t get Groh, though, and had to settle for Philadelphia’s Johnny Rawlings. Casey Stengel was one of the players put into the trade to balance it out.

As soon as he found out about the trade, Stengel, delighted to leave a cellar-dweller for a pennant race, left Philadelphia for Boston, where the Giants were on the road. “I wasn’t taking no chances,” he would explain years later. “I didn’t want anybody to change their mind.”

He would also explain that more than the pennant race, he appreciated the chance to play for McGraw. The apprenticeship that would lead to the most rewarding years of Stengel’s life was about to begin.