Recently retired New York Giants player/manager John Ward thinks that the open sale of players has gone too far. “I wouldn’t play in Kansas City under any circumstances,” he says, but a club could force anyone to play there or not play at all. 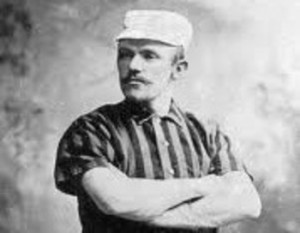 In 1885, shortstop John Montgomery Ward of the New York Giants was a rarity among baseball players, a graduate of the Columbia Law School, married to a lovely Broadway actress named Helen Dauvray, and willing to take on the club owners on their own terms. Ward denounced the reserve clause, which had been expanded and now kept every man on every roster from deciding for himself for whom he wanted to play. At a meeting in New York City, he helped found the Brotherhood of Professional Base Ball Players to fight against it. It was the players’ first attempt to organize.

The Brotherhood went so far as to start it’s own league in 1890, the Players’ League, but in the end three big leagues — the National League, the Players’ League, and the American Association — simply proved too many. Attendance dipped dangerously low for everyone, and the Players’ League, undercapitalized, had to eventually sue for peace. The National League, triumphant, could afford to be generous. It offered a general amnesty. Ward, who had played for the Giants prior to 1890, was allowed to sign with Brooklyn, where he played two seasons before returning to the Giants as their captain. The reserve clause, however, remained firmly in place.

One of Ward’s Giant teammates, Amos Rusie, was the dominant strikeout pitcher of the 1890s, leading the National League in Ks in 1890, ’91, ’93, ’94 and ’95. He was a consistent winner, going 36-13 in 1894, and 22-21 with a bad team in 1895. The Giants’ owner at the time was Andrew Freedman, whom Bill James accurately describes as “George Steinbrenner on quaaludes, with a touch of Al Capone thrown in.” Rusie had a number of run-ins with this madman, but when he drew his last paycheck in 1895, he found that Freedman had withheld $200 — the most one could make in a season at that time was $2,500 — for unspecified violations of training and indifferent pitching late in the season.

Rusie understood that Freedman was simply lowering his salary without going to the trouble of negotiating it with him. He refused to report to the Giants in 1896 until the money was refunded. Freedman refused to give it back, and Rusie held out. For the entire season. The press supported him, the fans organized a boycott. Freedman would not relent.

With John Montgomery Ward representing him, Rusie appealed to the league. He lost. He sued. The other owners pleaded with Freedman to be reasonable. He refused. Finally, the other owners got together and paid Rusie a reported $3,000 for the season he had missed. Rusie then rejoined the Giants for 1897.