At the Polo Grounds, Willie Mays has a three-run homer, and Ruben Gomez pitches his second complete-game win of the new season as the Giants beat the Pirates, 3-1. Pirate Hank Foiles hits a 425-foot triple and a 258-foot home run. 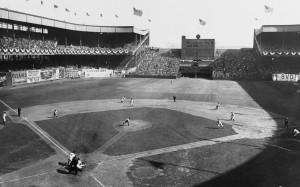 The venerable Polo Grounds was by 1957 hardly an ideal place for baseball. The cavernous, horseshoe-shaped arena resembled a football stadium that had been converted for baseball use, not the showcase for baseball it was supposed to be. (In fact, from 1925 to 1955, the Stoneham family, who owned the New York Giants baseball franchise and the Polo Grounds, leased the park to the New York football Giants for their Sunday home games from 1925 to 1955.) Unlike later fields, it had been squeezed into the land that was available, so it measured a short 280 feet down the left-field line and a scant 257 feet down the right-field line, with the often-changing center-field fence anywhere from 480 to 505 feet. As a result of its unusual configuration, a ball hit over a portion of the outfield fence closest to home plate was a home run, but a ball hit higher and farther to almost the same point was in play. 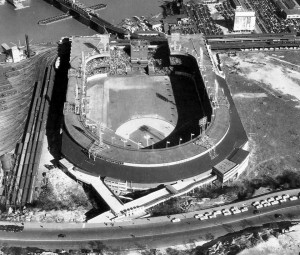 This entry was posted in This Day in Giants History, Uncategorized and tagged Polo Grounds, Ruben Gomez, Willie Mays. Bookmark the permalink.