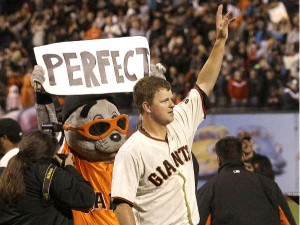 Last time, we looked at Giant position players who had led the team in WAR in every given ten-year period, from 1883-92 to 2005-14, from Roger Connor to Buster Posey. So today, I’ll reveal the list of pitchers who led all Giant hurlers in WAR for each ten-year period. (Remember, the years listed represent the FIRST year in the period, so, say 1914-15 would actually represent 1914-23 and 1915-24.)

(The complete list of 1-2-3 finishers for any ten-year period can be found here.)

As with the hitters, this list shows us a lot about the history of the Giants. As the Giants have had three hitters — Ott, Mays and Bonds — who dominated the their leader board, so we have three pitchers — Mathewson, Hubbell and Marichal — dominating this one. The teams that won four straight pennants in 1921-24 did so without dominant starters, but still, with Nehf and the Barnes brothers and some others, they were good enough.

We see that pitching is always scarce, and was especially so for the Giants at certain points. Again, the World War II years are particularly tough for the Giants. We would expect Carl Hubbell and Hal Schumacher to have the highest WAR in ten-year periods that both cover the late 1930s and the war years, but we also see Dave Koslo, Larry Jansen and Sal Maglie all sitting atop decades that include the war, even though Koslo is the only one who pitched any during the conflict (78 innings in 1942).

From the trades of Marichal and Perry until the rise of the troika of Cain, Lincecum and Bumgarner is a period when the Giants struggle mightily to have sustained good pitching. (By the way, I had not remembered that Jim Barr was consistently better than John Montefusco in the 1970s.) Greg Minton, a reliever, is actually the Giants’ best pitcher in the decades 1979-88 and 1980-89. Rod Beck and Robb Nen show up as second-best for ten-year periods during 1987-2007. Bill Swift, who was a Giant for only three years, and accumulated only 9.8 WAR in that time, dominates the years of the late 1980s and early 1990s with nine first-place appearances.