The Giants’ Most Lopsided Teams, Part 2

Posted on September 9, 2014 by Charles Johnson 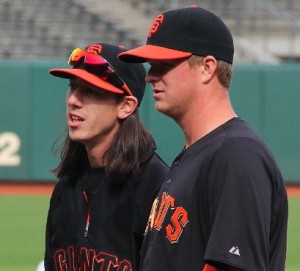 We remember this part of Giants history because we lived it. Matt Cain, Tim Lincecum, and, later, Madison Bumgarner were a troika that led one of the greatest eras of Giant pitching. We first saw the fruits in 2008, when Lincecum won his first Cy Young Award and put up a 168 ERA+ and 2.62 FIP. Cain added a 117 ERA+, again demonstrating his seeming talent for reliably putting up an ERA+ better than his FIP (3.91 in 2008) would predict. It seemed hard to believe that drafting Cain, Lincecum and Bumgarner could be done by the same front office that signed Barry Zito to $126 million over seven seasons, or put together the Aaron Rowand/Randy Winn/Dave Roberts outfield for more than $9 million per player-season for 11 total seasons. The lack of power in that outfield led to catcher Bengie Molina (career 86 OPS+) batting cleanup.

For the four years 2005-11, of all major-league teams, the Giants were first in fewest runs allowed, second in lowest OPS allowed, fourth in lowest OBP allowed, and first in strikeouts. Over the same years, the Giants hitters ranked 28th in runs, 25th in OPS, and 28th in home runs. They scored fewer than 700 runs in each of those seasons (fewer than 600 in 2011!), averaging 641 runs a season at a time when the average National League team scored 705. In 2009, the Giants took 351 unintentional walks, one of the lowest totals of the last half-century.

This was a fantastic pitching staff. Many of these pitcher, particularly Antonelli and Grissom, would put up excellent numbers over the next few years. The pitching’s dominance in 1955-57, however, was also a function of the decline of the offense over that period, except for the incomparable Mays.

An Important Note
You may have noticed that the lopsided teams that favored hitters managed better win/loss records than their pitching-heavy counterparts. Be advised, however, that this is almost exclusively because the WAR difference for the top twelve hitter-heavy teams was twice as large as that for pitching-heavy teams. When analyzing all team-seasons since 1992, there were 139 teams that scored 10 more oWAR than pWAR, but only 15 teams that scored 10 more pWAR than oWAR.

Before you read too much into that, it is important to remember that Baseball-Reference assigns just 41% of all possible WAR to pitchers and the remaining 59% to position players.

Only five teams have won the World Series with a staff WAR more than 10 wins higher than their lineup. Those teams are as follows: