The Giants End a Historic Streak, Though Not Theirs

Over 51 2/3 innings, from June 3 to June 10, Washington Nationals starters did not walk a single batter. During the same time, they struck out 51 batters. Over that span, they posted a 1.66 FIP, putting them at almost peak Pedro Martinez. That hasn’t happened in at least a century.

Everything got started on June 3, when, in the sixth inning, Jordan Zimmerman walked Jimmy Rollins on a full count.

Zimmerman then started out Chase Utley with three balls. The Nationals’ streak began with a 3-0 count to a disciplined hitter, but Utley lined out. Marlon Byrd flied out. Ryan Howard was the streak’s first strikeout.

Over the next two days, Stephen Strasburg and Doug Fister were dominant, and the Nats swept the Phillies. After the Nationals flew to San Diego, Tanner Roark was brilliant, Blake Treinen followed with his customary contact approach, and then Zimmerman had the start of a lifetime. A short trip north, and Stasburg owned the Giants. Finally, Tuesday evening, Fister went six innings before losing Brandon Hicks.

The whole thing lasted 691 pitches, to 192 batters. It’s true that most of those batters were Phillies and Padres, who are not very good batters, but still, no other staff has recently ripped off a streak like this.

How close did the Nationals come to a walk that ultimately wasn’t issued? Very close, but only once, on Tuesday in San Francisco. Here’s a pitch Fister threw to Hunter Pence on and 3-0 count: 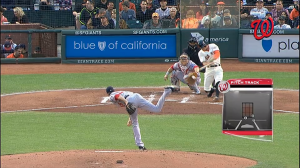 The pitch was way down and inside, but Pence went after it anyway. Give credit to Fister for throwing something Pence would swing at, although that might be the one swinging strike all year for the Giants that was farthest from the center of the strike zone (non-Panda division). Had Pence walked, the streak would have been shorter, but still historic.

Though the Yankees’ rotation has a slightly lower walk rate, the Nationals lead baseball, by a wide margin, in K%  -BB%. As a historical rotation, the Nationals are fourth on the all-time list in K% – BB%, less than a percentage point behind the leading 2002 Diamondbacks. And they get Gio Gonzalez back any day now.

As a baseball fan, I’d love to see the Giants play the Nationals in the postseason. As a Giant fan, I’m not so sure.