When Pedro Martinez left the Boston Red Sox as a free agent, the Red Sox got an extra pick in the next June amateur draft. When Albert Pujols signed with the Angels, the Cardinals got a compensatory draft pick, too. Think about what each team got. Clay Buchholz was the compensation pick for Martinez, and Michael Wacha was the compensation pick for Pujols. They both pitched in the most recent World Series. While these weren’t trades, if they were, we’d think of them as brilliant. A superstar on the other side of the hill for a prospect with superstar potential? You take that almost every time.

Compensatory draft picks are not a new thing. They’ve been around since 1977, when the Yankees drafted Rex Hudler with the pick they got from the White Sox when Chicago signed Ron Blomberg. Wacha’s success, and the fact that on Thursday, June 5, Major League Baseball will conduct its annual amateur draft, made me curious about the greatest compensatory draft picks in Giants history.

Powell, taken with the 22nd pick in the first round, and Cruz, taken as the fourth pick in the supplemental round, were both drafted in compensation for the Giants’ losing first baseman Will Clark, who had signed with the Texas Rangers after the 1993 season. The two outfielders never amounted to much. By my count, the Giants have had 26 compensation picks for losing free agents. The fact that these two (who each produced 0.3 WAR for the Giants) place so high on this list demonstrates that for the Giants, the scouting behind compensation picks has not been a strength. Drafting is an inexact science, and lots of draftees never make the majors, but players drafted after Cruz in the first two rounds of the 1994 draft included Jay Payton, Troy Glause and Matt LeCroy.

Hennessey was drafted 21st in the first round, with a pick provided by the Cleveland Indians when they signed Ellis Burks to a three-year contract. Hennessey would come up to the big club in 2004, and start 32 games for the Giants over four seasons, without much success. Hennessey was moved to the bullpen in 2006, though, and it was as a reliever that he found brief success, throwing more than 68 innings in 2007 with an ERA+ of 132. But after Hennesey’s disappointing 2008 (ERA+ of 57), the Giants outrighted him to the minors. Hennessey refused the assignment and became a free agent. He tried to pitch for the Baltimore Orioles in 2009, but could not because of injuries. He spent 2010 and 2011 in the minors before retiring. Players drafted after Hennessey in the first and supplemental rounds included Bobby Crosby, Jeremy Bonderman, Jeff Mathis, David Wright.

On July 23, 1998, to bolster the roster in an attempt to make the playoffs, the Giants traded Jacob Cruz and reliever Steve Reed to the Cleveland Indians for shortstop Shawon Dunston and relievers Alvin Morman and Jose Mesa. At the conclusion of the season, the Giants made the rational decision to let Mesa walk, and because of his status as a former closer (he had led the American League champion Indians in saves in 1995), they got awarded the ninth pick in the supplemental round. With it, they chose Williams, who had a very good rookie season in 2003, starting twenty-one games with an ERA+ of 128. The next season, he was merely average, and his strikeout rate started its annual decline, although his 10-7 record hid that from most of the press. After three poor starts in 2005, the Giants traded Williams and reliever David Aardsma to the Chicago Cubs for reliever LaTroy Hawkins. Willaims has since his short time with the Cubs spent time pitching in the minors for several systems, with Long Beach in an independent league, and with Indios de Mayaguez in Mexico, before making it back to the majors with the Los Angeles Angels and now the Houston Astros.

Eddie Milner spent one year with the Giants, playing center field in 84 games. When he signed with the Cincinnati Reds after the 1987 season, the Giants were awarded Cincinnati’s first round pick (number 15 overall). With it, they chose shortstop Royce Clayton, who would come up for good in 1992. Clayton was never a good hitter, but as our ways of measuring defensive play have improved, so has Clayton’s reputation. He actually contributed quite a lot to the Giants with his glove, before being traded after the 1995 season to St. Louis, essentially for Allen Watson. His defensive value continued to be great through 1997, and he hung on to have a 17-year career. 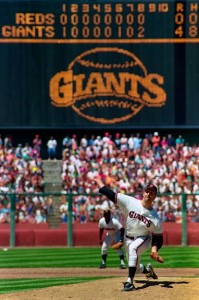 Scott Garrelts pitches in the ninth inning (he had a no-hitter through 8 2/3) against Cincinnati at Candlestick Park on July 29, 1990. (Photo by Brad Mangin)

Right-handed pitcher Scott Garrelts was drafted with the 15th overall pick, a pick provided by the California Angels when they signed pitcher Jim Barr after the 1978 season. He enjoyed two distinct careers in ten years with the Giants from 1982 to 1991. At different times he was a stopper out of the bullpen and the ace of the starting rotation. Garrelts began his major-league career as a starter plagued by control problems, became an all-star reliever. In 1989, though, with the Craig Lefferts established as the closer and the Giants in need of a starter, Garrelts took a spot in the rotation. He emerged as the ace of a pennant-winning team. Garrelts amassed a 9.7 WAR over his career, 4.0 of it in a glorious 1989.