The Declining Workload of Starting Pitchers 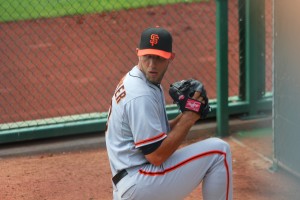 In 1903, New York Giant Joe McGinnity pitched 434 innings. Last season, Madison Bumgarner led the Giants in innings pitched, throwing 201 1/3 innings. This is the second-lowest total ever from a Giant team-leader in a non-strike season. (Matt Cain threw exactly 200 innings in 2007.) In 1978, Nolan Ryan (not a Giant) missed over a month’s worth of games because of two different ailments. He finished with more innings that year than Bumgarner did last year.

The trend is obvious. Starting pitchers are throwing fewer innings. Bumgarner is only the second Giant to lead the team in innings and not throw a complete game. (Noah Lowry did so in 2005.) We might see a time when it is common for a pitcher without a complete game to lead the team in innings pitched. Even if you’re used to the new way pitchers are used, that’ll still be freaky.

The question is, though, does this make for better baseball? This may be a question of aesthetics. On one side is the “Finish-What-You-Started” camp. There’s a certain allure to a pitcher finishing his own start. It’s okay to admit that. The crowd gets amped up, and the pitcher bears down to get that last out, even if he’s exhausted. It might not be the best long-term strategy for the team, but it’s fun while it’s happening.

Or maybe it is a viable long-term strategy. It’s hard to say that fewer innings are making starters healthier, and Joe Sheehan has for some time claimed that injuries to pitchers cannot be predicted and are essentially random. If that’s the case, maybe there’s a chance we’ll go back to where we were 20 years ago. While the days of the four-man rotation are over, maybe there’s a chance of more pitches, more complete games, and more 200+-inning pitchers than we’re used to now. It would make for quicker — and so some would say, more enjoyable — games.

The other camp would be the “Eccentric-Relievers-Throwing-Really-Hard-Are-Cool” camp. Because the guys taking the innings left on the table by the modern-day start throw 500 miles per hour. The most successful pitching staffs usually have two or three high-quality relievers, and those pitchers throw really, really hard. And if they don’t, they’re wacky and deceptive, like Sergio Romo or Javier Lopez.

While there’s something to the idea of one pitcher pitching the entire game, there’s also something appealing about a variety of pitchers. The Giants can go from Jeremy Affeldt to Sergio Romo to Javier Lopez to Santiago Casilla. All of them have their quirks, and all of them have different looks. This variety is fun, but comes at the cost of Alvin Dark‘s old-mule style of staff management.

I think I’m in Camp #2, but only because I’m used to it now. I didn’t get to see Sandy Koufax or Bob Gibson. I did see Greg Maddux. Of course, those guys are freaks. I’m not sure how exciting it would be to watch some of the more pedestrian pitchers do it. Livan Hernandez threw 12 complete games as a Giant. I don’t remember a single one.