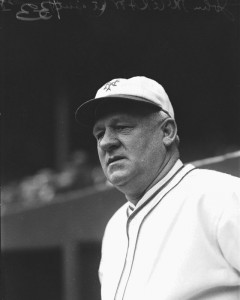 John McGraw in 1928, courtesy of the Conlon Collection

In 1932, the Giants moved their spring training camp to Los Angeles, an area not lacking in diversions. It combined great weather, the uncritical adulation of the local Hollywood stars, unlimited access during prohibition to good liquor, and even a visit to Jim Coffroth’s plush Agua Caliente track, across the border in Mexico. The notorious horse-player John McGraw should have been in a great mood.

And, in the beginning, he was. Though he was still overweight, McGraw’s poor health had improved a bit in the off-season, and training in Los Angeles offered a reunion with old friends. Mike Donlin was a character actor in the movies; Tillie Shafer owned a haberdashery patronized by film stars; Fred Snodgrass was a hardware merchant of distinction in his home town of Oxnard; Chief Meyers was enjoying a pleasant retirement in nearby Riverside; the fighters James Jeffries and Tom Sharkey, who fought twenty tough rounds in San Francisco in 1898 and twenty-five at Coney Island in 1899, both lived in the area; and Tod Sloan, one of the great jockeys of all time, was there too.

But McGraw’s grouchiness soon returned. As might have been expected during the worst point of the Depression, turnouts at Wrigley Field in Los Angeles, on Santa Catalina Island (where the Chicago Cubs were based) and at San Diego, San Francisco and Oakland were disappointing. The players didn’t like Los Angeles, either. The sprawling metropolis made for expensive cab fares from the Hotel Biltmore to the ballpark, to Agua Caliente, or almost anywhere else they wanted to go.

When the mayor of Santa Cruz cajoled the Giants into playing an exhibition in his town, he closed the schools, the banks and the stores so that nobody would have to miss the game. McGraw was advertised as the big attraction, but he had a lengthy lunch and then ran into some old pals, not getting to the park until after the game started. The fans had become apprehensive — maybe the great man wasn’t going to show. As a result, the public address announcer was particularly relieved when he saw McGraw finally walk onto the field. He had trouble controlling his excitement, shouting, “There he is! The famous Muggsy McGraw!”

This anonymous announcer, who lived thousands of miles from New York, could not have known how thoroughly McGraw detested that nickname. It was like calling Richard Nixon, however naively, “Tricky Dick” to his face. McGraw, predictably, started cursing. Just as predictably, he found a scapegoat to curse, working over his pitcher, Roy “Tarzan” Parmelee, whose legendary wildness was worse than usual and who had already walked a number of the minor-league batters he was facing. Sportswriter Frank Graham, who was at that game, wrote that, for McGraw, this amplified embarrassment had taken all the pleasure out of the trip.