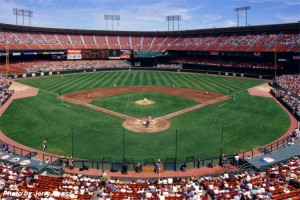 This past Sunday, the San Jose Earthquakes of Major League Soccer played Atletico Madrid in a friendly at Candlestick Park. The match was billed as the last sporting event to take place in the old stadium before it is torn down. The Giants stopped playing baseball at Candlestick Park fifteen years ago. It was the worst-situated ballpark in modern American sports history. Back in December 2013, when the San Francisco 49ers played their last game there, NPR’s Tom Goldman had a nice overview. Just a snippet:

As told in Candlestick Park by Ted Atlas, the story goes that in 1957, Horace Stoneham, owner of baseball’s New York Giants, was in San Francisco looking for a new home for his team.

Some local boosters took him at the spot on the shore of San Francisco Bay where Candlestick Park ultimately was built. They took him in the morning, when the winds were calm, and Stoneham liked it. He signed the deal, and building began.

But on a return visit, Stoneham went later in the day. It’s said he asked a worker: “Does the wind often blow like this?”

“Yeah, every day,” the worker replied. “But only in the afternoon and early evening.”

It would prove to be incredibly windy during day games, especially. Willie Mays cautioned his fellow outfielders that a quick first step was virtually useless at Candlestick. Breaking on a ball right away almost guaranteed humiliation for an outfielder. There has been plenty of speculation that Mays might have owned the all-time home run record if he hadn’t played his home games in a perpetual tornado. The fact is, he hit more home runs at home than on the road during his years at the ‘Stick.

Every player had to adjust to the park. Pitcher Mike Krukow picked up a tip from Joe Morgan, for whom he’d been traded to the Giants: Pour mineral oil all over your body. Jeffrey Leonard used baby oil. Kevin Mitchell went for Vick’s VapoRub. (You couldn’t sit next to him in the dugout,” Will Clark once said. “You couldn’t take all the menthol.”) Pitcher Vida Blue would sit in the clubhouse steam room between innings, following the game on the radio so he’d know when to return. He also slathered heating balm on his back, arms and legs.

In 1971, when the 49ers joined the Giants as tenants at Candlestick, and the park was enclosed, the wind became less of a factor for fans. In fact, I found when I started going in 1986 that day games, when it was sunny, were pleasant, certainly more so than night games.

The decision to build the ballpark on Candlestick Point, though, didn’t just discomfort fans and players. It nearly led to the Giants leaving San Francisco. The Giants moved to Candlestick in 1960, and attendance was decent for a while. Yet in 1967, the Giants ranked sixth in a ten-team league, despite finishing second in the standings. In ’68, they fell to seventh in attendance despite another second-place finish. And in 1971 — by then, the Athletics were in Oakland and playing well — the Giants finally finished in first place but ranked tenth in a now-twelve-team league in attendance.

Things got worse. In 1974 and ’75, the Giants drew barely half a million fans per season. In ’75, the Giants were nearly sold to the Labatt Brewery interests, which would have moved the franchise to Toronto. A few years later, a move to Denver seemed likely. But somehow the Giants remained. They did draw more than two million fans in 1989, 1993, and 1999. But that was it. Three times in 40 years. By contrast, the Kansas City Royals drew at least two million fans eleven times from 1978 to 1991. The Giants’ attendance problems and near-moves weren’t due solely to Candlestick, but it was a hard place to get to and a hard place to enjoy, and playing baseball there was a huge mistake.

In 1960, Joe Garagiola was broadcasting a Giants-Cardinals game from Candlestick. He was outdoors, it was brutally cold and windy, and someone asked Garagiola if he’d like a cup of hot coffee. “Never mind the coffee,” Garagiola said. “Get a priest.”