How Many Good Giants Were Good Prospects? 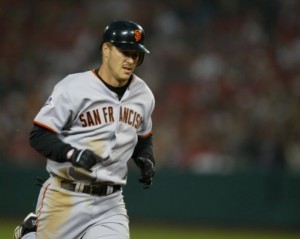 But when one focuses on ranked prospects, one ignores a massive amount of the player pool — those players who weren’t considered good prospects. Now, all players in professional baseball are great baseball players. Everyone in professional ball has some promise. The major leagues, though, are even more selective, and have the very best baseball players. But of those major leaguers, some had a lot of hype, and some had none. But I wonder, how many good Giant players were good prospects before that?

There is no perfect way to analyze this, but there is a simple way to do so. I decided to use a cutoff of 3 WAR. So, for me, a good player was one worth at least three wins above replacement. For the prospect part I used Baseball America‘s historical top-100 list. They are an authority, and they’ve made it easy by providing rankings going back to 1990. So, for me, the definition of a good prospect was a top-100 prospect. I don’t care when the guy was a good prospect; so long as he was a good prospect at least once, that counted.

I know any top-100 list doesn’t include all the good prospects. Intriguing players are always left off. But these are supposed to be the best 100 prospects, averaging about three prospects per major-league organization, and when you get into an organization’s mid-tier prospects, they are not expected to have big futures. They are not supposed to become 3-WAR players.

So, while all the baseball sites around are putting out their prospect lists, I have a table, which includes those Giants who have had at least one 3-WAR season, and whether and where they were ranked as a top-100 prospect by Baseball America:

That’s 33 post-1990-Giants with at least one 3-WAR season while playing for the team. (Barry Bonds, Ellis Burks and Stan Javier, who all had 3-WAR seasons with the Giants since 1990, did not make the list because their days as prospects predated 1990.)  By my definition, that’s 33 “good” players. Of those, 18, slightly more than half, were ranked by Baseball America. Of those, 14 at one point ranked in BA‘s top 50.

Tim Lincecum? He was a prospect. Madison Bumgarner? He was a prospect. Buster Posey? He was a really good prospect. Yet there were six 5+ WAR seasons put up by players who were previously unranked as prospects. Jeff Kent put up half of those. He was drafted by the Blue Jays in the 20th round of the 1989 draft and was the player-to-be-named-later in the 1992 trade that sent him to the Mets. He never ranked while in the Jays’ or Mets’ systems. Then there’s Rich Aurilia, who in 1994 — before ever playing a game in the majors — was traded by the Rangers to the Giants as part of a package for John Burkett.

Now to answer the question, based on the method explained above, 55% of good Giant players were at one time good prospects. Which means 45% of good players were not considered good prospects. That doesn’t necessarily mean they were non-prospects — it just means they overachieved, relative to prior expectations, and this might be of some consolation to Giant fans whose team currently doesn’t score real well in farm-system rankings. Good players are typically seen coming, to some degree. Just not half the time. Players will surprise you, and there might be no better evidence than Jeff Kent winning the 2000 MVP award.