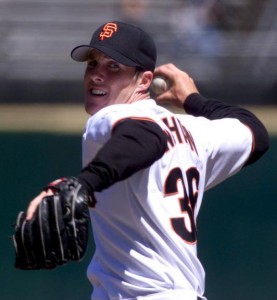 Joe Nathan, in what must have been his happiest days

Before the inception of interleague play, the Giants’ great experience playing against the franchise now known as the Minnesota Twins was in two World Series. The Washington Senators beat the New York Giants, four games to three, in 1924, and then the Giants returned the favor, defeating the Senators in the 1933 Fall Classic, four games to one.

Senators owner Calvin Griffith moved his franchise to Minnesota before the 1961 season, and renamed them the Minnesota Twins. The Giants themselves had almost been Minneapolis’s team. Before being seduced by Walter O’Malley and George Christopher into moving his Giants to San Francisco in 1958, Horace Stoneham intended to move them to Minneapolis, where he already owned the American Association’s Minneapolis Millers.

Tonight the Giants start a three-game series against the Minnesota Twins. To mark the occasion, I’ve utilized Baseball-Reference’s multi-franchise tool and compiled a team out of the guys who played for both the Senators/Twins and the Giants. In the case of these two franchises, they’ve shared 105 players. I whittled those down to a 25-man roster. I chose those 25 based on the strength of their peaks or whole careers, not necessarily how well they did in either Washington/Minnesota or New York/San Francisco.

You’ll notice that this lineup is much less impressive than the one I created a couple of weeks ago from players who spent time with both the Giants and the Braves. There are no Hall-of-Famers here. There are two reasons for this. First, until 1986, waivers were necessary at all times for interleague trades, with the exception of two non-waiver interleague trading periods: February 15-April 1 and the five days after the conclusion of the World Series. So until 1986, trades usually took place within leagues, and thus our pool of prospective players is less than half what we had when building a roster from Giants/Braves players. Second, much more often than not, the Senators/Twins have been a bad team. While the Giants have a cumulative winning percentage of .538, the Senators/Twins have one of .481. This is not so much the fault of the Minnesota end of the franchise as it is the work of the Clark and Calvin Griffith-owned Washington Senators, who in their 60 years in the nation’s capital had only 18 winning seasons and finished seventh or eighth in an eight-team league 24 times.

That’s a ho-hum bench. Shanty Hogan, who was eligible for the Giants-Braves team I created, but did not make the cut there, makes it here.

It’s in the bullpen that we have consistent high quality on our dreamed-up Giants-Senators-Twins. This is probably testimony to the fact that the modern reliever often ends up playing for multiple teams over his career and so there is in fact a very large pool from which to choose.