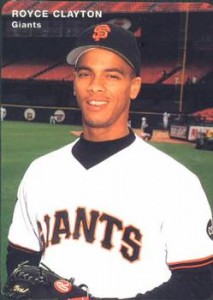 Each year, Baseball America publishes a list of each team’s top-10 prospects. They’ve had the list going back to 1998 on their website, but they’ve actually been doing rankings since 1983. I discovered just recently that they’ve published the full archives, going back to their very first top-10 list. This is yet more crack for baseball nerds.

The full list for every team is here, and while my fantasy team’s success depends on me knowing Baseball America‘s, and every other, newest prospect list backwards and forwards come March, at Elysian Fielders, I ‘m only concerned about the Giants. Here is some interesting stuff I learned.

1. The Giants did pretty well with their top prospects of the ’80s
Of course we know about Will Clark and Matt Williams, but lots of Giant top-10 players had nice, long major-league careers. Mark Grant, Scott Garrelts, Dan Gladden, Jeff Robinson, John Burkett, Rob Deer, Terry Mulholland, Charlie Hayes. The list is long.

Maybe it is for every other team, too, but I was surprised to look over the list and know so many former major leaguers. Compare it to the ’90s, for example. Here’s the 1994 list:

Singleton was the only one with much of a career other than Torres, who didn’t show up again for a decade. That’s a bad list.

2. The 1996 list was the demarcation line of suck/not suck
First on that list? Shawn Estes. Seventh? Rich Aurilia. The Giants realized that they couldn’t draft players, but at least they pilfered other team’s prospects. And in the very next season, the Giants won the division with the help of those two. They’d win a pennant in 2002 with the added help of Russ Ortiz.

3. Between 1997 and 1998, Sabean channeled George Allen
Between the ’97 list and the ’98 list, Brian Sabean traded almost half of his top-10 list. Joe Fontenot went for Robb Nen, and Keith Foulke, Mike Caruso, and Mike Villano all went for Wilson Alvarez and Roberto Hernandez. Darin Blood went for Joe Carter, Jason Brester went for Ellis Burks, and Jacob Cruz went for Jose Mesa. Sabean loved to deal back then and he seemed to view prospects as just a means to acquire veterans. In fairness, though, most of these deals turned out pretty well.

4. Royce Clayton was a super-prospect
There was a time when Royce Clayton was Jurickson Profar — a plus fielder who was supposed to hit. Alas, he didn’t hit. But at least WAR is giving him his due for his defense. He was worth almost 20 wins, second-most from any Giants-drafted shortstop (Chris Speier) in the draft era. Even if you include the Rangers-drafted Aurilia, he’s still in second.

This stuff fascinates me.