A Pitcher Injury Could Not Stop 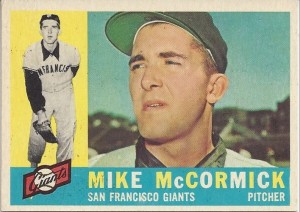 Last week, we looked at Giants pitchers of the past whose careers were truncated by injury. The point was to show that the current “rash” of pitcher injuries are nothing new, and that pitchers have always gotten hurt, and always gotten hurt in large number. The difference today is that with modern medicine, including Tommy John surgery, many of the pitchers who get hurt return to the mound and often to success at the big league level. Today, we look at a pitcher who, without the benefit of modern medicine, overcame what should have been devastating injury, reinvented himself, and reached the heights of success in the major leagues.

Mike McCormick might be the best example of baseball’s willingness to jettison a hurt player, but also the ability of a pitcher to remake himself and succeed anyway. A high school phenom signed just short of his eighteenth birthday as a bonus baby by the Giants in 1956, McCormick worked from the bullpen his first couple of seasons, overcoming an initial wildness. When the team moved to San Francisco in 1958, he became a starter. McCormick came into his own in 1960, leading the league with a 2.70 ERA, and striking out twice as many as he walked. The next season, his 3.20 ERA was the league’s fourth best.

But McCormick had piled up almost 1,000 innings before his 23rd birthday; since 1920, only Bob Feller had pitched more at the same age. The workload caught up with him in 1962, when he suffered shoulder soreness that never went away. While the Giants won the pennant, McCormick contributed little: a 5-5 record and 5.38 ERA. His fastball seemed to have vanished. X-rays showed no damage and the club told him he was fine. “Well, I wasn’t fine,” he said later. “I couldn’t throw the ball 60 feet without getting tears in my eyes.” At times his shoulder hurt so badly that he “hoped the catcher wouldn’t throw the ball back.” Manager Alvin Dark thought McCormick was malingering. The pitcher watched the World Series from the bench and was traded to the Baltimore Orioles in December. He was just 24, but several sportswriters wrote the epitaph to his career.

Serving as a spot starter for Baltimore in 1963, McCormick completed only two of 21 starts with a 4.30 ERA. Publicly, he insisted his shoulder was fine, but that was not true. Doctors at Johns Hopkins hospital diagnosed a torn muscle. (Nobody then used the term rotator cuff.) The next spring he hit bottom when the Orioles sent him down to Triple-A Rochester. After seven full major-league seasons, it was McCormick’s first taste of the minors. And a lucky break: A Rochester doctor gave him a cortisone shot, easing his pain, and he bounced back to win eight of his last nine decisions with a 3.29 ERA for the Red Wings. The Orioles, still skeptical, shipped McCormick to the Washington Senators for a minor-league pitcher and cash.

In two seasons with the expansion Senators, McCormick reinvented himself. His fastball never returned, so he relied on control, changing speeds and his screwball. (Pitching is funny that way. What the screwball took from Cliff Melton it gave to McCormick.) “I re-established credibility in myself and got my feet back on the ground to where people recognized that ‘He’s not the same type pitcher that he used to be, but he can pitch.’ ” Although he had a losing record with the losing team, McCormick’s ERA+ were slightly better than average. He was left-handed and had good control, so he was allowed to stick around. After the 1966 season Washington traded McCormick back to San Francisco.

The Giants had no high hopes for McCormick; they just wanted him to balance a staff that was primarily right-handed. After another cortisone shot, now an annual rite of spring, he joined a starting rotation that included future Hall of Famers Juan Marichal and Gaylord Perry and another left-handed former bonus baby, Ray Sadecki. “I would never have gotten out of spring training without the cortisone,” he said. “I wasn’t pain-free during the season, but I could pitch.” He kept quiet about the pain: “If you were hurt, it’s just move over, here comes the next guy.”

McCormick was inconsistent for the first two months. On June 19 he beat Cincinnati in only his second complete game, and then won his next seven decisions, including two shutouts. He allowed no more than two runs in 17 of his 35 starts and pitched a career-high 262 ⅓ innings. He leaned heavily on his screwball, which he described as a hard changeup. “I know I can’t pitch the way I used to, but I think that this realization is what saved me,” he said.

By season’s end McCormick sported a 2.85 ERA with five shutouts and a 22-10 record, the most victories in the league. That was good enough to win the National League Cy Young Award with 18 of the 20 first-place votes by sportswriters. (It was the first time a separate award was given for each league.)

McCormick was not dominant; ten NL pitchers had better ERAs and ten recorded more wins above replacement. Completing 14 of 35 starts, he benefited from above-average run support and a strong bullpen that blew only one win after he left the mound. The unexpected comeback was one of the big stories of the year. The San Francisco Chronicle’s Ron Fimrite wrote, “He left the Giants’ employ five years ago as a fastball pitcher. He returned this year as a craftsman.”

McCormick picked up his 100th victory during his Cy Young season. He was still only 29. But the next year his screwball stopped breaking. He was hit hard and was consigned to the bullpen in August. He finished 12-14, 3.58. “I was the victim of bad pitching,” McCormick remembered. “My own.” He bounced back to an 11-9, 3.34 mark in 1969, but that was the end of his effectiveness. In 1970 a pinched nerve in his back caused numbness in one leg. He was torched to the tune of a 6.20 ERA and was traded to the Yankees in August.