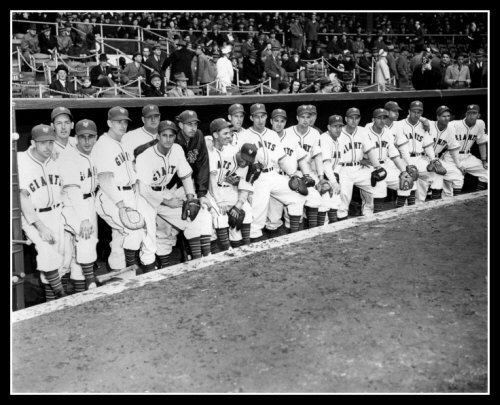 Most Strikeouts by a Pitcher:  Carl Hubbell, 118

Key Transaction:  On February 16, 1935, the Giants released Lefty O’Doul. One of John McGraw’s great mistakes had been trading O’Doul to the Phillies in 1928. O’Doul would win two National League batting titles before the Giants got him back in 1933.

1934 home and road uniforms, courtesy of the National Baseball Hall of Fame database, “Dressed to the Nines,” at www.exhibits.baseballhalloffame.org/dressed_to_the_nines/database.htm

Memorable Quotation:  On January 24, Giant manager Bill Terry sat with the press in New York before heading down to Miami for spring training. He was asked about the Giants’ chances, and on their competition. After commenting on the Cubs and Cardinals, he was asked about the Dodgers. “I was just wondering,” said Terry, “whether they were still in the league.” What he said was offered as a joke, and thought so little of at the time that it was only reported by two of the nine metropolitan dailies, but it would become one of the major sports stories of the year.

What Went Right:  The Giants played very well, and had a five-game lead with three weeks to play.

What Went Wrong:  With four games left to play, they still lead by 2½. Unfortunately, they had to play that team Terry had joked about in January. New York baseball fans at that time did not generally travel to the rival’s park, but they would make an exception for special circumstances. The 1934 schedule concluded with the Dodgers playing a two-game series at the Polo Grounds. Terry found his friendly bleachers filled with hostile fans. The Dodgers won both games while St. Louis concluded a 21-7 September with a four-game sweep of the Reds. Bill Terry had earned his epitaph.